Nova Scotia gay musician and choral conductor Scott Jones was stabbed in the back and throat slashed outside a New Glasgow club in October 2013. Nineteen-year-old Shane Edward Matheson was charged with attempted murder, pleaded guilty and was sentenced to 10 years in prison.

The stabbing severed Jones’ spinal cord, leaving Jones paralyzed from the waist down. Yet when he read his victim impact statement in Nova Scotia Supreme Court during sentencing, Jones told Matheson, “Shane, nothing can justify what you've done to me, but I forgive you for what you have done."
Read more »
Posted by Three Dollar Bill at 16:51 1 comment:


In 1994 pioneering stand-up comic Bob Smith became the first openly-gay comic to appear on The Tonight Show. Bob died on January 20, 2018, after a 12-year battle against ALS. He was 59. A Celebration of Life Memorial was held at Carolines comedy club in New York on March 5. This is my final interview with Bob (it originally ran in Fugues magazine and NewNowNext in December 2016) when he answered my email Q&A with the help of his devoted life partner, screenwriter Michael Zam and their great friend, comedian Eddie Sarfaty, by pointing out letters on a board with his feet. Bob exemplified sheer courage right until the end. Thanks for the laughs, Bob. RIP.

Comedy legend Bob Smith is perhaps best-known for opening closet doors as the first out gay comic to appear on The Tonight Show. But today Smith is blazing a new trail as he confronts the degenerative affects of ALS, in his life and on the pages of his candid new memoir Treehab: Tales From My Natural, Wild Life.

Diagnosed with ALS (amyotrophic lateral sclerosis, or Lou Gehrig’s disease) a decade ago, Smith has fought a good fight against the progressive neurodegenerative disease, which attacks the nerve cells responsible for controlling voluntary muscles, such as those in the arms, legs and face.

When he agreed to do our email interview, Smith answered my questions—with the help of his devoted life partner, screenwriter Michael Zam, and their great friend, comedian Eddie Sarfaty—by pointing out letters on a board with his feet.

Montreal soul singer Wayne Tennant has been out to his close friends and associates for a long time, but this year Tennant decided to take it a step further: Publicly come out as a proud gay man in song and in interviews. In our candid Q&A, the gifted entertainer – who grew up on a diet of Prince, Michael Jackson, Terrence Trent D'arby, David Bowie and Stevie Wonder – looks back on his music career, the showbiz closet and his upcoming new album.

Read more »
Posted by Three Dollar Bill at 16:47 No comments:


American film director C. Fitz's superb 2016 documentary film Jewel's Catch One is about one of America’s first Black discos, Catch One, which lesbian pioneer Jewel Thais-Williams opened in Los Angeles in 1973. The legendary disco was a longtime sanctuary for LGBTQ people until it closed in July 2015 after 42 years.

This film explores the iconic disco's golden years — when everybody from Sylvester to Madonna used to hang out at "The Catch" — and the legacy of Jewel the pioneering businesswoman and activist who fought hate and discrimination for decades.

Three Dollar Bill sat down with C. Fitz on the eve of her award-winning film’s October 1 screening at the Montreal International Black Film Festival.
Read more »
Posted by Three Dollar Bill at 13:31 1 comment: So when I told Moore that I had planned for this to be the “gay interview,” she happily replied, “Yes! Let’s queen it up!”
Read more »
Posted by Three Dollar Bill at 12:24 No comments: 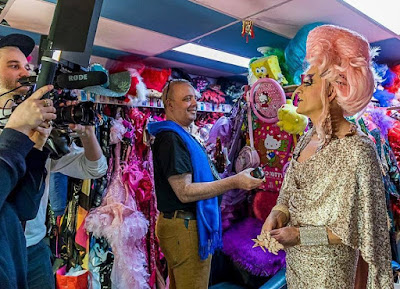 I am proud of this terrific mini-documentary celebrating the 30th anniversary of Montreal drag icon Mado Lamotte, who famously got her start at Poodles nightclub on the Main in 1987.👠Hats off to uber-talented videographer Guillaume Langlois who put together this really entertaining 10-minute doc—we got some very funny and candid interview footage with Mado backstage at Cabaret Mado, plus classic clips of Mado entertaining the throngs at the Divers/Cite queers arts festival , Fierté Montréal Pride and at Mado's 17th annual Drag Race at the Festival St-Ambroise Fringe de Montréal this summer. Merci, Mado! Long Live Mado!

Posted by Three Dollar Bill at 13:00 No comments:

UPDATE: Montreal Mayor Denis Coderre and Montreal Police Chief Philippe Pichet officially apologized at an August 18, 2017, press conference at Montreal City Hall, for historical anti-LGBTQ police raids. Pichet said he "regrets the events that were produced during police raids on gay bars during the 1960s to the 1990s. The actions attacked the dignity of the people concerned."

I have been publicly screaming for an official apology for years: Projet Montréal city councillor Richard Ryan this week said he too wants the City of Montreal and the SPVM to apologize for their violent police raids of LGBTQ establishments over the course of decades that resulted in “more than 800 people” being arrested — at Truxx in 1977, at Bud’s bar in 1984, the Sex Garage loft party in 1990 (now widely considered to be Montreal’s Stonewall), and at the Katacombes bar in 1994.

This does not include, among other raids, the 36 people arrested at Montreal’s Sauna Aquarius on Crescent Street in February 1975 (the bathhouse was later firebombed and two unclaimed corpses were buried in "Pauper's Field" in Notre-Dame-des-Neiges cemetery atop Mount Royal); the 13 people charged as found-ins after police raided Montreal’s Club Baths in January 1975 (another 26 were arrested there in May 1975); the 61 men arrested at Sauna David in April 1980; and the October 1975 raids on 7 queer bars, including Baby Face, the legendary lesbian bar.

Then there is the Neptune Sauna, opened in 1973 by Andre Laflamme and Lorne Holiday. At the time Laflamme and Holiday also owned the Aquarius Sauna when Montreal’s Gay Village was still downtown, before the exodus east after the 1976 Montreal summer Olympic games — an exodus precipitated by the systemic police raids.

The Neptune was raided by Montreal police on May 14, 1976. A friend of mine, Henri Labelle, was working as the cashier at the Neptune that night. Henri told me, “They yanked off people’s towels and threw everybody together and took pictures and charged them all with being in a common bawdy house.”

Henri noted, “There was a former mayor’s son there, a government minister, a secretary to the Catholic Archbishop and a couple of cops, but they were ushered out the back door while everyone else was thrown in paddy wagons.”
Read more »
Posted by Three Dollar Bill at 09:46 3 comments: