Then I googled him and discovered Farley died (of natural causes) at his home in Manhattan this past March 27 at the age of 85.

I met Mr. Granger once, back in 2007, when St-Martin’s Press published his memoirs Include Me Out. And I asked him then about Rope, which was loosely based on real-life, early-20th-century gay killers Leopold and Loeb, who committed a “thrill kill” to impress their mentor who, in Rope, is played by James Stewart.

Granger and his co-star, the late John Dall, played the gay killers. Coincidentally, in real life, Granger was bisexual and Dall was gay.

“John and I did discuss the [gay] relationship between our characters,” Granger told me in New York City. “But we never discussed our own private lives. We discussed [sexuality] in terms of our characters, not our personal lives. You got to realize this was 1947. No one discussed those things openly then. People forget that. The word ‘gay’ wasn’t even appropriated yet.” 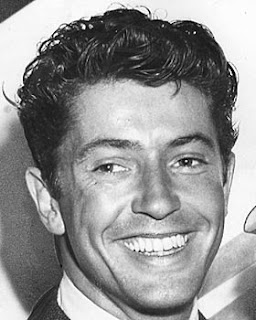 As for Dall, Granger added, “I wasn’t attracted to him in that way – it just never would have happened.”

But Hitchcock caught what chemistry they had on screen. In fact, Hitchcock would have elevated the gay subtext had it not been for the censors.

“Hitch wanted to be more forthright,” said Granger, whose affectionate friendship with the legendary film director is explored in Granger's star-studded memoir which was named after one of the most famous malapropisms of his old Hollywood boss and nemesis, MGM studio head Sam Goldwyn.

“I liked Hitch a lot,” Granger continued. “He gets a bum rap because they say he disliked actors and said that actors should be treated like cattle. But he loved the press. He loved the press most of all. And he was great to work for because he was so prepared. I think we became good friends for a while, especially during [the filming of] Strangers on a Train, which was certainly a happier experience for us both.”

Granger lost his virginity twice – first to a woman, then to a man – in the same night. It makes for a pretty fun chapter in his memoirs.

In fact, over the years, Granger would have love affairs and relationships with everybody from Hollywood beauty Ava Gardner and Shelley Winters to Arthur Laurents and Leonard Bernstein. And his childhood and lifelong friend was celebrated Hollywood and Broadway actor Roddy McDowell, later renowned for his weekly “salons.”

(Salon regular Joan Rivers once told me how she and other Hollywood legends loved to dine and tell stories at Roddy’s palatial California home. “There’s nothing left like Roddy and his salons anymore,” Rivers said.)

When Granger served in the U.S. Navy during WWII he never had sex with another man because, he said, “I felt it was dangerous.”

Granger’s relationships with women were, of course, well documented – notably his engagement to Shelley Winters – but Granger said he never hid his gay affairs.

“That never happened in Hollywood. I never hid. I never considered myself in the closet. When I had my relationship with Arthur Laurents during the filming of Rope, all of my friends knew about it. We went out to dinner together and went to parties together. It was the crowd we hung out with – it was a New York music and theatre crowd. None of those people cared a fig about whom you were having sex with.”

Granger’s falling out with Goldwyn at MGM (“I was bothered they kept loaning me out for trashy Universal films”) would effectively end his Hollywood film career. He then made mostly forgettable films in Italy, starred in several U.S. daytime soap operas, and triumphantly returned to the stage and Broadway, where he won a Village Voice OBIE Award in 1985 for his work in the Off-Broadway production of Lanford Wilson's Tally & Son.

Still, Granger admitted he’d rather be a star in Old Hollywood than today.

“With all its flaws, the studio system was much more conducive to developing an actor’s career. Today it’s scattershot. Some people make it and some people don’t. Today you get one chance and that’s it. The thing with Goldwyn was his golden touch had passed. He no longer knew how to make stars like the other studios. He had passed his prime.”

Granger, who was 81 years old when I sat with him, had no regrets, especially since he and his late partner, the television producer and director Robert Calhoun (who would pass away a year later, in May 2008, at the age of 78), had been a couple since 1963.

“I never thought I’d have a relationship that would last that long. We [survived] our ups and downs. Getting married [was] not important to me. But whether I want it or not, I think it [same-sex marriage] should be legalized. There are people who want it and need it. It would offer protection from discrimination as well as an emotional stability that isn’t always found in gay relationships.”

Granger paused for a moment. “If we could [have], Bob and I might [have] even [gotten] married,” he said.

Which would have made for one of the finest Hollywood endings ever.
Posted by Three Dollar Bill at 02:48