HOW ONE NIGHT IN MONTREAL CHANGED THE LIFE OF MARLENE DIETRICH

I adore Dietrich: her gaze, her husky voice, not to mention her participation in one of the greatest barroom brawls ever filmed, in Destry Rides Again.

But it's Morocco I love most. Dietrich plays a bisexual cabaret singer who gives everything up for the man she loves, a Foreign Legionnaire (a gorgeous Gary Cooper) whom she follows into the Sahara desert.

Even now, over 80 years after her Hollywood debut and nearly 20 years after her death on May 6, 1992, the tempestuous screen legend and gay icon still captivates. Just ask Montrealer John Banks, who was 15 years old when he met Marlene Dietrich backstage during her run at Her Majesty's Theatre in Montreal back in 1960.
"The announcement [that she was coming to Montreal] unleashed a frenzy of excitement that only a concert combining Céline Dion and Madonna might match today," recalls Banks, now 67. "The night itself — well, it was Halloween and there were more Dietrichs to be seen on the streets of Montreal [in the city's then-downtown Gay Village] than men in trousers, though quite a few of the Dietrich impersonators were wearing trousers too!"

After Dietrich's Halloween night concert, she met many of her admirers — including several Dietrich female impersonators — backstage. And there was Banks, who asked Dietrich to autograph three records. She refused to sign the third, a Decca compilation from her films.

"But these are old songs," Dietrich said. "I don't sound like that anymore."

Instead of acquiescing, though, Banks snapped, "Well, I wasn't around then and I like the way orchestras sounded back then!"

Dietrich paused, then pushed Banks aside and said, "You stay here."

Then Dietrich greeted her other admirers. Later, after drinks at Montreal's Ritz Carlton Hotel, Banks was hired as Dietrich's personal secretary for the next 12 years. "Let's face it," he says, "I was her gofer."

Banks lovingly explains how the unlikely pair became friends ("Jahn-ny," Dietrich called him) over plenty more meals and drinks while Dietrich toured Europe and America. "She was my university," he says.

"She never had her face lifted," Banks says, "because she didn't give a shit. She could tape it up and do all sorts of things to make herself look like Dietrich. But in her offstage life, she really didn't care. [Director] Mike Nichols said something that is so very, very true: When you went out with Marlene, she was the only woman he ever knew who didn't look in a mirror all night. And it's true. She was very secure in her looks. She had been an exceptionally beautiful woman."

Dietrich also had affairs with other women. She and Claudette Colbert were close all their lives, and Banks suspects they were even lovers. "Getting Marlene to talk about Hollywood was very hard," he explains, though he points out that Marlene never hid the truth.

When, for instance, rumours claimed she was having affairs with Maurice Chevalier and Gary Cooper at the same time (she was), she appeared at the 1932 premiere of Cecil B DeMille's biblical epic The Sign of the Cross on the arms of both men — dressed as a man!

"Marlene adored drag. At every show, there would be drag queens dressed as Marlene. And she liked meeting them backstage to see what they were wearing. In 1920s Berlin, she was often the only woman allowed in gay bars. She'd arrive in drag herself."

With the rise of the Third Reich, though, Dietrich — ranked the ninth-greatest female star of all time by the American Film Institute in 1999  — stunned Germany when she spurned Hitler's advances and took American citizenship.

Then she sang for the Allied troops during World War II. Of all the units that she adopted on her USO tours and who considered her one of their own, it was the 82nd Airborne that truly captured Marlene's heart.

"I think when she said her war work was the most important thing she'd ever done in her life, she meant it," Banks says. "She loved performing for the soldiers. She liked being one of the boys."

Banks points out that Dietrich, director Billy Wilder and other Hollywood Germans created a fund in the late 1930s to spirit Jews and dissidents out of Germany. "When she did Knight Without Armour in England in 1937, her salary — which was $450,000 — was put into escrow to help Jews escape Germany. Marlene went totally broke during the war."

In her 2011 book Marlene: A Personal Biography (JR Books), author Charlotte Chandler writes that Dietrich asked her onetime lover Douglas Fairbanks, Jr. for his help in an extraordinary plot: Dietrich would agree to make one film in Germany, on condition that she could be alone with the Fuhrer. And this would give her an opportunity to kill him.

“I would gush over how I feel about him, intimating that I am desperately in love with him,” Dietrich told Fairbanks. “I've heard Hitler likes me and I'm certain he would agree.”

Realizing she would be searched, Dietrich was prepared to go into Hitler's bedroom naked – but Chandler reports the only detail Dietrich could not resolve was how to smuggle in a murder weapon. She considered a poisoned hairpin, but Fairbanks said, “Fortunately, her idea didn't go any further because she didn't figure out how to complete the assassination, but she was a very brave girl and I know she would have gambled her life if she thought she had a chance of success.”

Dietrich's return to Germany in 1960 for a concert tour was controversial and made international headlines. While some Germans spat on her in the streets of Berlin, and protestors chanted "Marlene Go Home!" during her performances at Berlin's Titania Palast theatre, she was warmly greeted by other Germans, including Berlin Mayor Willy Brandt. 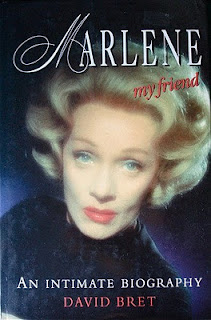 Much of this is documented in British biographer David Bret's excellent book Marlene My Friend: An Intimate Biography, published a year after Dietrich died in 1992.

"I was the last person she talked to — she called me two days before she died," Bret told me a couple of years ago.

"I have called to say that I love you, and now I may die," Dietrich told Bret.

(I told Bret about John Banks and how John met Marlene in Montreal in 1960. Bret got back to me later, saying he'd dug up all of his Marlene interview notes and rediscovered that Dietrich kept referring to a man named "Johnny," which is Montrealer John Banks. So I offered to introduce Bret to Banks if ever he wants to follow up on his Dietrich biography.)

"When I die," Dietrich once said, "I'd like to be buried in Paris. But I'd also like to leave my heart in England, and in Germany — nothing."

When she died in Paris on May 6, 1992, though, her body, draped in the French flag, was flown to Germany in a German military plane and buried next to her mother in Berlin. To this day, neo-Nazis regularly desecrate her tombstone, whose inscription reads, "Hier steh ich an den Marken meiner Tage" (Here I stand at the milestone of my days).

Banks, meanwhile, says he'd finally had his fill by 1973. "[Her daughter] Maria, in London, would open a bottle of scotch in the afternoon for Marlene and that — that just threw me. And Marlene adored her daughter. There was no fighting Maria and I wasn't going to work with a drunk Dietriech."

Things only got worse in 1975 when Dietrich fell into the orchestra pit during a concert in Sydney, Australia, broke a leg and went into isolation for 17 years.

Banks last spoke with Dietrich in 1988 in Paris, where she lived out her final days in her 993 Park Avenue apartment surrounded by books, pictures and mementos. She watered her beloved geraniums, watched CNN and read several newspapers each day.

But Banks prefers to remember the old days with "Miss D" who, I discovered from David Bret, also remembered her "Jahn-ny" as that challenging loudmouth 15-year-old backstage in Montreal, where she took him under her wing.

"She was very nice to young people," Banks says softly, "and I miss her very much."