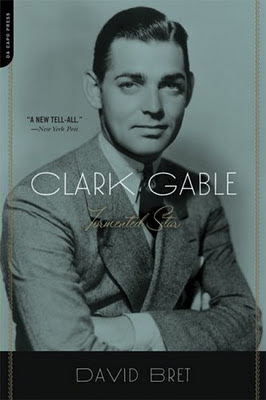 "Loretta Young’s deception was contrived to protect her budding movie career and the box-office power of the matinee idol Gable, who was married to someone else when they conceived their child in snowed-in Washington State," The New York Times reports. "They were on location, shooting the 1935 film The Call of the Wild, fictional lovers in front of the camera and actual lovers outside its range."

But Judy Lewis was not the only secret Clark Gable did everything to conceal.

While many Hollywood historians continue to ignore the real truth about Clark Gable's sexuality, it is now indisputable that Gable was a deeply-closeted homo.

I blabbed about Gable's secret gay life with famed British biographer David Bret, who has written bios of Elvis Presley (Elvis: The Hollywood Years claims Elvis had an affair with actor Nick Adams and Col. Tom Parker blackmailed Presley by threatening to reveal "secret information" that Elvis was a homo), Joan Crawford, Errol Flynn, Maria Callas, and his good friend, the late Marlene Dietrich ("I was the last person she talked to - she called me two days before she died").

Bret's 2008 bestselling biography Clark Gable: Tormented Star exposes Gable's secret gay life. And, let me tell you, it was extensive. Or at least it was "until 1942, when he 'became' straight," quips Bret.

So just how repressed was Clark Gable about his bisexuality?

"Gable was brought up in a gung-ho atmosphere working with his father in the oil fields," Bret explains. "On Friday night [the oil hands] would fetch the local prostitutes and had 10 minutes each. That's also the reason why Gable was so paranoid about cleanliness - from having sex with whores. And he did this because his father told him to. His father brought him up to believe he was a sissy. In the macho world of oilrigs, Gable was regarded as a bit of a pansy and his father called him that until the day he died. So Gable spent his entire life trying to prove he was a man."


There is a famous story Bret recalls in Tormented Star about why famed gay director George Cukor was fired from Gone With the Wind by David O. Selznick and replaced by The Wizard of Oz director Victor Fleming. Back at a 1937 party Cukor hosted, Gable spotted Cukor chatting with gay actor William Haines - whom Gable had serviced many times in his early years to further his career - and he assumed they were talking about him.

So, unable to look a "woman's director" in the eye, Gable had Cukor fired.

"Gable thought anyone who knew Haines had to be a raving queen," Bret says. "He didn't want others to think that of him."

Gable also outed other actors such as Johnny Mack Brown and Rod La Rocque to prevent himself from being outed.

"In those days there were two gangs in Hollywood - Joan Crawford's and Carole Lombard's," Bret explains. "Lombard is the one who termed 'fag hag.' These gangs went to all the gay bars in Hollywood and no one thought anything of it because [actors like Gable] all had beards. But Gable was more discreet with his relationships, like Rod La Rocque.

"But when Johnny Mack Brown was making the [1931] movie Laughing Sinners with Joan Crawford, Gable had him fired because he thought he could do the role better," Bret continues. "Then he threatened to out him if he revealed their affair."

If Clark Gable was once a debonair hero, he no longer is in my eyes.

"Yes, he was very hypocritical. [Outing men he slept with] did make me think of him lesser as a man," Bret agrees.

Here I must mention that Bret is long married to a woman but is also openly bisexual ("I get the best of both worlds!").

Says Bret, "Had I been in the same situation [as Gable], I would have done the same thing [stayed in the closet]. It was very difficult being gay in those days, much more than it is today. And today it's impossible. But today I'd also stick to my principles. Back then I would have made allowances because you would not have had a career."

The same might be said of Hollywood's current crop of closeted matinee idols.

"Others will be writing the same thing about them in 50 years," Bret says, noting of Gable, "It was okay [for him] to deny he's gay. But to ruin his boyfriend's career? That wasn't cool. But Hollywood is a cutthroat business."