BUGS GOES OUT IN A BLAZE OF GLORY HOLES! 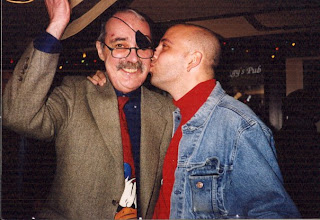 
Well, it has come to this: The global decline of newspapers has claimed yet another victim, Montreal's venerable Hour magazine, at least as you've known it, which for almost 20 years has always gone the extra mile covering this city's fabled underground cultural scenes. With the introduction of this column in July 1996, Hour became the first amongst Canada's alternative and mainstream newspapers to publish a real gay column, Three Dollar Bill.

Don't get me wrong, a new Hour will publish next week, but it will be a different paper than the one you are reading now, with an all-new editorial team. But when I started here in May 1995, following a period when a series of corporate mergers forced newspapers to cost-cut newsrooms into oblivion, my way into the newspaper biz was to be out.

Today when people ask me if I am more than just Mr. Three Dollar Bill, I reply, "Well, now that I'm in I can't get the fuck out."

But those early years at Hour were really fun, especially the summer of
1996 when we had no editor-in-chief and the run of the place. We pumped out many in-your-face newspapers during that era, a time when I fell in with my two mentors, legendary Montreal boulevardier and Gazette columnist Nick Auf der Maur, as well as another legend, New York Times bestselling author and the Godfather of Gay Lit, Felice Picano.

Nick - who passed away from cancer 13 years ago today, on April 7, 1998, just three days short of his 56th birthday - was always one for pithy anecdotes and hearty advice.

"Nick was a charming man, and he'd pinch anyone's bum!" Nick's daughter Melissa Auf der Maur told me two weeks ago. (Nick once even pinched the ass of Rudolf Nureyev!) "He is still an inspiration to anyone who reads about his life [in Nick: A Montreal Life, the anthology of his columns featuring an introduction by his old friend, Mordecai Richler] and the way he chose to live it. He was a quite a man.

"I'm happy for you that you got to see the last of that generation, all those old journalists before the Internet, before TV, when print was our source of news for hundreds of years," Melissa says. "My father was the last amazing generation of it, right down to the hat."

Many Sundays I joined Nick to read the Sunday New York Times at Else's bar, punctuating our grunts with tequila shots. After one all-night Crescent Street boozing session we ended up in his favourite pizzeria at 5 a.m. with his godson Jake Richler, where the staff served us hot coffee laced with Baileys.

And when I freaked out over work, Nick always calmed me down.

My cover story not only pissed off McIlwaine's lawyer, but also many of Montreal's gay activists. "Don't worry about it," Nick (who inherited Eling's cat) told me. "You know you're doing your job when everybody's pissed off at you. Besides, it was a great lede!"

My other mentor is Felice Picano, whom I first met at a Montreal brunch (merci, Louis Godbout!) over a decade ago. Picano founded two pioneering gay presses, Seahorse Press and the Gay Presses of New York, which launched writers like Harvey Fierstein. Moreover, with Andrew Holleran, Edmund White and others, he founded the Violet Quill, the groundbreaking gay male literary nucleus of the 20th century.

More importantly, Felice and his friends laid the groundwork so that folks like me could actually write Three Dollar Bill. When his publisher wanted to subtitle Felice's 1995 international bestseller Like People in History with the words "An American Novel," Felice insisted it be subtitled, "A Gay American Novel."

I've eaten smoked meat with Felice at Schwartz's; took him to the site of Sex Garage, Montreal's Stonewall; and for a decade he told me star-studded personal anecdotes for my annual Felice Picano column. I still remember the first time Felice read one of my columns. He said to me, "You're not an ordinary writer, and neither am I."

Over the years here at Hour mag and TDB headquarters, I've gotten death threats, outed politicians like Andre Boisclair, been banned in Winnipeg and investigated by the Royal Newfoundland Constabulary, got the last-ever sit-down interview with James Brown, pissed off B.B. King and been screamed at backstage by Cyndi Lauper.

I shall miss this paper, its editor and my good friend Jamie O'Meara, who always made me look good. And I still miss Nick terribly. He'd be disheartened to see the old newspaper world crumbling around us.

What I know for sure is, without my mentors Nick and Felice, this would be a different world.

But Felice has promised me his personal tour of San Francisco, and Nick, well, he'd be proud that after I get tanked tonight, I'll make a point of taking a piss in Ruelle Nick Auf der Maur.


O
Essential buttplug Thank you to all my TDB readers over the years. You can still find me here and in the pages of Xtra, Fugues and Current magazines.
Posted by Three Dollar Bill at 15:16