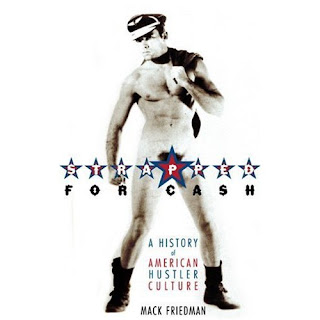 There are plenty of reasons I like American author Mack Friedman: I love his name because every time I say "Hey, Mack," I feel like I’m a gangster in an Edward G. Robinson flick; I think Mack’s a genuinely entertaining writer; and I admire his guts for putting himself through university with his ass.

"I had a stable of repeat customers," says the onetime gay hustler and Chicago native who used to place escort ads in newspapers when he attended the University of Minnesota. "I wedged them in around classes."


Mack was 19 at the time, and if he’d been caught by the law he might’ve had to offer up his ass behind bars for free instead (Mack also explains the ins and out of his old sexwork career in Hook e-zine).

But had this been the Roman Empire – where male prostitution was widespread and taxed by the state until 498 AD – he would have been feted on Robigalia Day, the national Roman holiday celebrating male sex workers on April 25 each year.

"The value of male prostitutes exceeds that of farmlands," Cato once astutely noted in the second century BC.

Much has, of course, changed since Cato uttered those famous words. Friedman, who wrote his must-read 2003 book Strapped for Cash: A History of American Hustler Culture (Alyson Books) after graduation, knows all about that firsthand. But it wasn’t all wine and roses back in the days of Caesar, Nero and Claudius either.

"In the Roman Empire, slaves and former slaves (freedmen) were engaged in survival sex and sold from buyer to buyer for the price of chickpeas," Friedman explains. "Freed imperial Roman boys could also have sex with men, as long as they did it voluntarily, not via servitude. They could expect varied rewards, ranging from love, tutelage and gifts to money, shelter and food. For the next few hundred years, it would still be respectable for youths of all classes to be passive partners in their rewarded intercourse with older men."

Friedman continues, "Excavations have unearthed ancient male brothels within the former Roman Empire, but these were not the only sanctioned spots for sex work. [Hustlers] plied their trade on thoroughfares, in alleyways and gymnasiums, at the pools and the public baths, in earmarked taverns – and in, as [historian Gary] Devore [put] it, ‘other spaces specifically set aside for mercenary sex or utilized for the selling of sex only at certain times, such as under the arches of an amphitheatre, in cemeteries, along city walls, and inside deserted buildings.’"

The biggest pimp of all – collecting taxes alongside the state – was the Catholic Church.

Yes, you read right: "The Catholic Church in the Roman Empire made a lot of money taxing male prostitutes," Friedman says.

Now, considering the Catholic Church created the world’s first multinational corporation on the backs of male sex workers, I find it rich that in the more than 1,500 years since Rome repealed its tax on male prostitutes in 498 AD, every subsequent pope has publicly demonized the sex trade and gay sex – all the while Catholic priests continue to sexually abuse thousands young boys around the world.

Moreover,  investigative journalist Carmelo Abbate's book Sex and the Vatican: A Secret Journey in the Reign of the Chaste (published in April 2011 by Edizioni Piemme in French and Italian, with anonymous testimonies from priests and undercover reporting) reveals a flourishing gay scene for priests in Rome.

"Priests of all nationalities divide their time between Via della Conciliazione (the main road leading to St. Peter's Basilica) and the party scene of Rome by night," Edizioni Piemme stated in a press release.

No pope in history – except for, perhaps, the current one, Pope Benedict XVI (whom I call the Benedict Arnold of our times) – was more homophobic than the late Pope John Paul II. No pope in history has done so much to make so many people worldwide suffer needlessly.

"Pope John Paul II’s rejection of life-saving condoms contributed to the deaths of millions from AIDS," Brett Lock of the British gay civil rights group OutRage! said following PJP II's death on April 2, 2005. "He could have said it was the moral duty of Catholics to stop the spread of HIV. Endorsing the use of condoms would have saved lives. Despite over 40 million people being infected worldwide with HIV, the Pope turned his back on a proven method of stopping virus transmission."

Worse, as Lock rightly points out, "He even authorized the Vatican to lie that condoms spread AIDS by allowing HIV to pass through the rubber."

Science long ago proved that propaganda to be bullshit – which pretty much sums up Pope John Paul II’s legacy, from his poor micromanagement of pedophile priest scandals worldwide, especially in the United States, to the Vatican’s public lobbying against advancing gay human rights at the United Nations, right down to voting against benefits for gay UN staffers.

Pope John Paul II’s fingerprints remain everywhere. So I did not mourn his passing in April 2005.

Observers say the Pope suffered greatly in his last days. I am glad he suffered, as he made tens of millions of gays and lesbians around the world suffer until his dying breath. Watching millions of pilgrims pay tribute to Pope John Paul II at his funeral  – the most garish ever held in human history  – I could not help but think that, instead of celebrating his life (and with his successor Pope Benedict XVI continuing to hypocritically enforce The Vatican's anti-gay policies), the world would be wiser to celebrate Robigalia on April 25.

"There is more tolerance and respect for the sex trade in the gay community," Mack Friedman says. "I think we’re more open-minded about sex and its role in our happiness. We understand its importance. St-Augustine once said, ‘Banish prostitutes and you reduce society to chaos through unsatisfied lust.’ Who understands that more than gay men?"