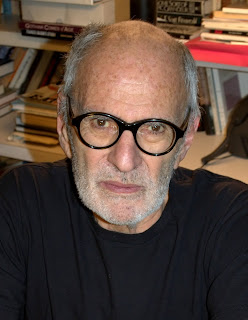 Larry Kramer's The Normal Heart (about the dawn of AIDS) opens on Broadway on April 27
Photo by David Shankbone, courtesy Larry Kramer


There is more American history in Montreal than there is in most towns in America. To wit, soon after the American Revolutionary War began in the spring of 1775, U.S. General Richard Montgomery and his troops successfully invaded Montreal on Nov. 13 and held the city until June the following year, when Benedict Arnold and his American troops abandoned the city as British soldiers arrived.

Almost a century later, Jefferson Davis, President of the Confederate States of America, sent his wife and children to live in Montreal during the American Civil War.

Jefferson Davis' nemesis was, of course, Abraham Lincoln. So when McGill University commemorated the 200th anniversary of Lincoln’s birth on Feb. 12, 1809, I decided to call up living legend Larry Kramer – whose 1985 play The Normal Heart opens on Broadway on April 27 – at his NYC home.

That's because McGill owns one of the world’s largest private collections of Lincoln memorabilia outside the United States. The collection includes the diary of Dr. Charles Sabin Taft, the 23-year-old army surgeon who attended Lincoln on his deathbed and details Lincoln’s slow death after he was shot by assassin John Wilkes Booth on April 14, 1865, as well as 20 letters written by Lincoln.

But it is not these priceless letters that I am interested in.

No, the letters I want to read are those the once-married Lincoln wrote to the true love of his life, Springfield, Illinois shopkeeper Joshua Speed, with whom Lincoln shared a bed for four years in their apartment above Speed’s store.

Story goes a stash of love letters – not to mention Speed’s diary detailing their relationship – was unearthed some years ago and purchased by gay literary icon Larry Kramer.

Now when I tell straight folks that Lincoln was gay, they mostly scoff at me.

"Yeah, next you’re going to claim George Washington was gay!"

Well, folks, have I got news for you.

When I called Mr. Kramer he told me he had just printed up the 4,000-page first draft of his new book, The American People: A History, which he has been researching and writing for over 30 years. This is the book that will once and for all expose the truth of Lincoln and Speed’s relationship.

"My book will be crucified too," Kramer says. "People have vested interests in keeping their heroes straight."

Of The American People, Kramer adds, "It’s an attempt to put us [gay people] back in history from the beginning. No history book ever recorded anything about us, and researching this book I found out that both Lincoln and George Washington were gay."

Kramer points out Washington was in love with Alexander Hamilton, whom Washington appointed the first United States Secretary of the Treasury.

"I got that from Gore Vidal," Kramer explains, "and because of [Washington and Hamilton's gay relationship] the country became Hamiltonian instead of Jeffersonian."

About Lincoln, Kramer continues, "Tripp and I shared information with each other, and I was the first person he showed his book to. But I have stuff that will go beyond anything that has ever been written or said."

In other words, Abraham Lincoln was a fabulous cocksucker. I’m so excited I want to scream it loudly from the rooftops.

"Straight people have trouble with everything to do with us and we have learnt not to let that bother us," Kramer tells me. "People [also] laugh at me when I say Lincoln was gay. But I say, ‘How dare you laugh? Why is it impossible and why is it funny?’"

Kramer – who was just the 11th HIV-positive person in America to get a liver transplant, in December 2001 – is now 75.

"I just hope I have enough years left in me to finish this book," says the former Pulitzer Prize and Oscar nominee, whose play The Normal Heart was crowned one of the Hundred Best Plays of the Twentieth Century by the Royal National Theatre of Great Britain, and who famously started the life-saving AIDS activist group ACT UP in the 1980s.

In short, Kramer is Gay America’s Abe Lincoln. He will set us free, at least in our history books.

But when I call the living legend an icon, the warrior replies, "When people call me that, I find it embarrassing and move on."

Essential buttplug Larry Kramer's The Normal Heart - a play about the dawn of the AIDS crisis - opens on Broadway on April 27 at the intimate John Golden Theatre (252 West 45th Street). Directed by Joel Grey and George C. Wolfe, the production stars Broadway actor-director Joe Mantello as activist Ned Weeks, leading a cast that includes Ellen Barkin and out Canadian actor Luke Macfarlane (you've seen him in the ABC drama Brothers and Sisters).

Following the first preview performance on April 19, volunteers handed out copies of a typed letter from the 75-year-old playwright that you can read in The Advocate in its entirety. The open letter concludes, "Please know that the world has suffered at the very least some 75 million infections [of HIV] and 35 million deaths [from AIDS]. When the action of the play that you have just seen begins, there were 41. I have never seen such wrongs as this plague, in all its guises, represents, and continues to say about us all."