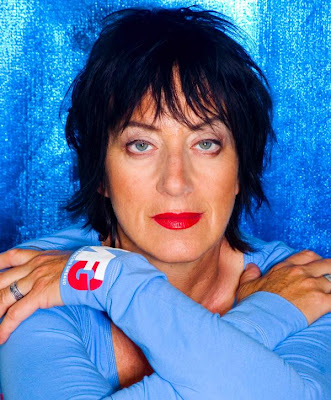 It shall come as no surprise to most folks that I can morph into a splendid diva if I’ve drunk too much champagne. That’s exactly what happened to me in Vegas a couple years ago at a Pamper Party at the Kim Vo spa in the Mirage, where I demanded they pop open another bottle of pink bubbly while I got the rundown on which Hollywood stars pampered at Kim Vo have the ugliest feet.

I was sitting between my colleague, Toronto publicist Stephen Shinn, and his good friend, Canadian pop icon Carole Pope, as we each got mani-pedis.

With those words I was, essentially, blessed by our Pope.

But the post-punk queen of raunch can’t stand that other pope, the one I call the Benedict Arnold of our times, Pope Benedict XVI.

"Don’t get me started," Pope says from her NYC home. "And just look at the Catholic saints, especially the Spanish ones – they’re into S&M, bloodletting, repressed sexuality. I think the Catholic Church is really kinky."

Kinky is also the word many would use to describe the lyrics of Carole Pope, one of the most subversive and influential pop icons to ever come out of this country. Though Pope herself maintains she and Kevan Staples thought of Rough Trade’s music as "sexual parody."

Still, from the time Toronto’s CHUM-FM demanded her old band Rough Trade change a lyric in their number one hit, High School Confidential (the lyric "She makes me cream my jeans when she comes my way" was replaced with "She makes me mmm my jeans when she comes my way"), to her brand-new solo album Landfall (featuring a duet with Rufus Wainwright and a song written with Hawksley Workman), Pope has always made waves.

"I just want people to know that I’m still writing and making music," says Pope, who points out her terrific 2004 album Transcend "was not properly promoted by the record company. People don’t remember it. But I just want to move forward and expand my writing." 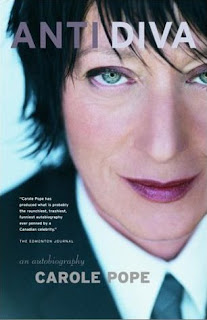 Still, it is hard to forget her past, especially since it’s so well-documented, including in her own star-studded bestselling memoir Anti-Diva (Random House), published in 2000. The film rights for Pope's autobiography have been optioned and a film is in development.

Not to mention it was David Bowie who chose Rough Trade to open the Canadian leg of his 1983 Serious Moonlight tour. And it was Carole Pope who taught Divine – the iconic drag queen who rose to cult fame in director John Waters’ film Pink Flamingos – how to sing for the 1980 musical Restless Underwear at the Beacon Theatre in NYC.

She also rerecorded High School Confidential for the hit Queer as Folk TV series. And one of the great punk-rock songs of all time, Rough Trade’s Shakedown, stole the soundtrack of the hugely controversial 1980 film Cruising directed by William Friedkin and starring Al Pacino.

The film is about a serial killer targeting gay men in NYC’s S&M scene. Gay activists absolutely hated the film at the time, which, to be honest, has aged quite well and hauntingly presaged the coming AIDS onslaught.


"It was pretty shocking back then but we couldn’t turn down the chance to work with Friedkin," Pope says today. "Even I found it shocking. But now it’s a big cult film and I love those ass chaps!"

The Rough Trade album Shaking the Foundations was also adapted into a musical by Montreal-based playwright Bryden MacDonald, who remembers it even shocked La Pope.

"She’s amazing and a little scary, but I think she’s an amazing songwriter," MacDonald told me last year. "When she found out [my play] was going to be [all] jazz piano, she was like, ‘Fuuuuuckkkkk…’ But it was five hot chicks in tuxedos and Carole almost creamed in her pants!"

Pope was also the long-time love of British music legend Dusty Springfield. In fact, when I bumped into Carole in an elevator in Vegas, I actually had a copy of the 2008 book It’s Hard Being Queen: The Dusty Springfield Poems (Freehand Books) by Jeanette Lynes in my hand. 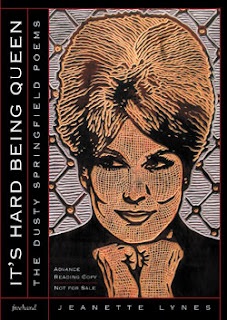 "[The author] is probably a stalker!" Carole deadpanned when I gave her the book.

Today, Carole says, "I thought some of that poetry was pretty good, pretty insightful."

What about the new Dusty Springfield Hollywood biopic now in the works – will Pope get involved?

"I don’t think so," Carole replies. "I do feel a bit protective about Dusty’s legacy. I really want [the producers of the film] to get what an innovative musician she was and not just focus on the sexuality and the drinking. Many singers were influenced by her."

Just like many have been influenced by La Pope, who now wishes she never got rid of her 1980s wardrobe. "I could shoot myself because they could be museum pieces!" she recently noted.

Like Grace Jones – who notoriously said of current fashionista Lady Gaga, "I prefer someone who is more original [and] not copying me" – Pope has little respect for Gaga. "She is very derivative and asexual," Pope says.

It’s true that 30 years ago Pope, now 61 (who goes to the gym four times a week and rides her bicycle all over NYC), was far ahead of her time. In many ways, she still is today.

"I’m flattered when people call me a living legend but…" Here Pope’s voice trails off and I am reminded of the time she told me a decade ago, "I’m so over me."

Facebook page for Carole Pope at The Flying Beaver Pubaret
Posted by Three Dollar Bill at 15:20