I remember I was chatting with 1980s pop star Samantha Fox the day after Les McKeown, frontman for 1970s heartthrobs the Bay City Rollers, admitted on the British TV show Rehab in February 2009 that he is bisexual. 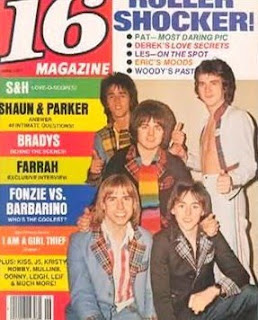 "I’ve been a bit of a George Michael, meeting people, often strangers, for sex," McKeown said. "Not in public toilets – I’m not big on the unhygienic side of things. These days you’d meet online and figure out a place where to meet – your place or mine."

Ironically, a week earlier, New Kids On The Block heartthrob Jonathan Knight was outed in America. In other words, the song remains the same.

But Fox – whose fabulous lesbian partner of 14 years, Myra Stratton, is also her manager – was as stunned about McKeown as I was.

"Les and I had become great friends on [an Australian] tour," Samantha explained. "When I was 10 in 1977 the BCR were huge and I used to wear white trousers and tartan bottoms! My friends and I had our own BCR song" – here Samantha sings it to me – "and I sang it to Les at the airport! I could see on that tour that he was a broken man. Now I understand [why]. I wish he had spoken to me because I could have helped him. Because it was [also] very difficult for me [coming out]. I could never live that lie that long because it destroys you. And people know. That’s what happened to me. Even when I went out with guys, like Paul Stanley of Kiss, I knew."

Clearly, McKeown has moved on and now accepts his bisexuality. As he told London’s Daily Mail when he was on the British TV show Rehab, “If you’ve got a secret and you’re a rotten lying bastard you always have to be careful of your lies. Now that I don’t have a secret I can’t get found out, can I?”


Les McKeown’s Legendary Bay City Rollers headline Montreal’s Corona Theatre (May 1), Belleville’s Empire Theatre (May 2), Barrymore's Music Hall in Ottawa (May 3), Casino Rama in Orillia (May 4), Studio Theatre at Hamilton Place (May 5), Winnipeg’s McPhillips Station Casino (May 8), The 40 in Brandon (May 9), The Odeon in Saskatoon (May 11), Prince Albert’s E.A. Rawlinson Centre for the Arts (May 13), Edmonton’s Century Casino (May 17), Calgary’s Chrome Showroom (May 18) and the Kelowna Community Theatre in B.C (May 20).