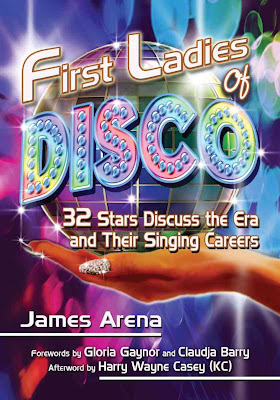 Gay audiences had torrid love affairs with disco divas well before the mainstream even heard the first strains of Donna Summer’s crossover smash hit “Love to Love You Baby,” which peaked at number two on the US Billboard Hot 100 in 1975.

But according to James Arena, author of the just-published book First Ladies of Disco, the genre’s gay core fan base is very much a North American phenomenon, closely tied to that era’s gay liberation movement.

“The women I interviewed in my book told me that gay audiences don’t dominate their shows in Europe,” says Arena. “Their audience base in Europe is broader and more diverse than it is here in North America.”

Which is also why – with the arrival of HIV – the homophobic “disco sucks” backlash destroyed many careers on this side of the pond. Disco, mainstream America made very clear, is cocksucker music.

“I think as gay people we are drawn to uplifting music with a lot of energy and disco certainly makes you feel happy,” explains Arena. “When these artists sang their songs in the late 1970s and early ‘80s, they became aware the gay community was supporting them and could make or break them in the United States. When their records came out, they were distributed to underground gay discos to see if the song would be a hit there. If the gay population didn’t like it, it probably wasn’t going to go anywhere.”

The 32 women in Arena’s book have much in common. “They have been through a lot of ups and downs and through it all remained very optimistic. They also have a great deal of loyalty to their fans. Every single one of them told me how much their fans mean to them and how moved they are that people still care for them.”

The book also features chapters on The Ritchie Family and Yvonne Elliman, but Arena admits, “It was a real coup to get Madleen Kane because she hasn’t done an interview in over 30 years. And it was an honour that Gloria Gaynor wrote the foreword to my book.”

There are also some singers from that era who flat-out refused to be interviewed for Arena’s book because of its title. “They felt they did not want to be classified as disco artists,” Arena says, quickly adding “And I won’t tell you who they are because I don’t think they were hostile.

“I also didn’t get to interview Andrea True because she passed away, as did Loleatta Holloway and Donna Summer. There is no denying the women in this book were eclipsed by Summer, who had amazing talent, charisma and that amazing voice. She really was the queen of disco. But the women in this book were more than one-hit wonders and deserve to be treated in the same light as Donna.”

(Read my final interview with Donna Summer in Xtra here.)

Arena says a sequel called The Original Legends of Disco – with chapters on The Trammps, George McCrae and Montreal singer France Joli – will be published in 2014, but for now is thrilled with the positive critical reception to First Ladies of Disco.

“The singers in this book all embrace disco and are proud of the work they did,” Arena says. “Dance music today is essentially disco, so we owe a lot to these women.”