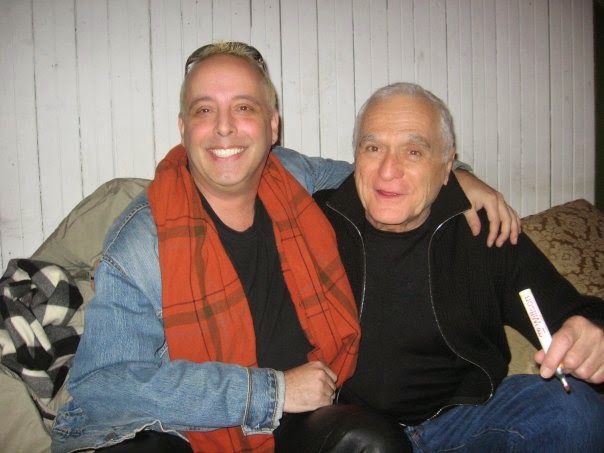 John Giorno remembers the moment he met Allen Ginsberg like it was yesterday. It was 1958, and they were both attending a reception at Columbia University where Giorno was a student and editor of The Columbia Review.

Giorno idolized Ginsberg, a Columbia grad whose landmark 1956 poem Howl is one of the principal works of the Beat Generation, along with Jack Kerouac’s On the Road and William S. Burroughs’s Naked Lunch.

"When I first read Howl I was a 19-year-old gay man in 1950s America and Allen was the first writer to reflect my mind," Giorno recalls today. "I didn’t see Allen standing with his back to me, but his elbow was sticking in my rib. My girlfriend said, ‘There’s that poet you like.’ Well, he liked young boys and I was a poet and we started blabbing. He liked me. Then there was this [other] guy who put his chin on my left shoulder and it was Jack Kerouac! He’s tanned and three inches from my face."

"I was just awestruck – On the Road had come out a year earlier. I was speechless. He looked like a tanned Marlon Brando! He leaned forward and spoke in my ear and I’m thinking, ‘Jack Kerouac’s lips have just touched my ear!’ I still don’t understand what he said!"

Giorno, now 72, would become lifelong friends with Ginsberg, Kerouac and later Burroughs, so much so that the internationally acclaimed poet has become known as one of the last living sons of the Beat Generation. "I’m a bit younger than all of them, that’s why I’m a son. But it’s one of those meaningless titles."

It was not until Giorno – who was born into an affluent American-Italian family, and worked as a stockbroker in NYC after he graduated from Columbia – met Andy Warhol at Warhol’s first solo New York Pop show in Eleanor Ward’s Stable gallery in November 1962 that his life would change, in the process revolutionizing the world of poetry and pop culture.

But Giorno was the originator of performance poetry and would create his Giorno Poetry Systems recording company in 1965, releasing over 40 vinyl albums and CDs of poets and musicians, including his friends Ginsberg and Burroughs, and later working with Laurie Anderson, Lou Reed, Patti Smith, David Johansen, Philip Glass and Frank Zappa.

And GPS would also revolutionize telephone information services in 1968, when Giorno created Dial-A-Poem, which had 15 phone lines connected to answering machines.

Today Giorno lives in the NYC loft he shared with Burroughs for decades, and I caught up with him at his home.


ooo
Hour You were the confidant of Andy Warhol. How important was he to your development as an artist and as a person?

John Giorno Extremely. I was young when I met him and figuring out what I was going to do, and he wasn’t famous then. Back in 1962 he was just this guy about to have his one-man show. I saw him every day, so I saw how he worked. By 1963 he started using found images. So I thought to myself, If he can, why can’t I? So he was a direct inspiration, even though I had studied art in school. It was [all about] seeing Andy do it live.

Hour Nobody really knows why you and Warhol split in 1964. What happened?

Giorno It was complicated. I was [the Factory's] first superstar and he was getting rid of me. It was the beginning of a pattern [for Warhol]. Burroughs came to New York in 1964 and [artist] Brion [Gysin, pictured on the cover of Burroughs's book Junk] became a lover and these two were staying at the Chelsea Hotel. It was two different worlds. And Burroughs was the door to political activism. So I went into a whole other world. [Then with Andy] it’s like, you know, they don’t answer your phone calls. Or they say, ‘I told so-and-so to invite you.’ That’s what happened. It wasn’t just one moment. There was never any fight. But that whole art world was an enormous influence on my work.

Hour Why wasn’t Warhol more openly gay in his work?

Giorno Because being gay was the kiss of death, like it still is today, sort of. Gay people were not considered fully human. We know that [artists] Jackson Pollock, Willem de Kooning, Robert Motherwell and the others thought it was not possible for gay men to be as good as themselves. Warhol didn’t want the liability of being a fag attached to his work. It’s all about economic values.

Hour What was it like for you growing up gay in pre-Stonewall America?

Giorno It was a heroic activity. I may have been called a fag or a queer but I was determined nothing was going to stop me. It became an idea to champion, especially when I met Burroughs and Ginsberg. [Being gay] is very much part of my identity. I was very radical with gay identity, though there’s less gay content in my work today.

Hour What was the first gay bar you went to?

Giorno The San Remo in NYC, which was also a literary bar. This must have been 1950-’51. Truman Capote, Gore Vidal and Kerouac went there but I was terrified to go in. But I went back the [next] week.

"I am," he says. "It was a great moment in history. It’s miraculous that it happened."

Later, when I mention that Liam O Gallagher, an avant-garde sound artist, painter and teacher whose San Francisco studio was a gathering place for Beat writers in the 1950s, passed away a month earlier (on Dec. 4, 2007), Giorno is stunned into silence.


ooo
Hour How did you and Burroughs get along?

Hour What are your thoughts on drug use today? Crystal meth is a far cry from LSD.

Giorno The two of them together was a nice trip! [Laughs] You know, if it wasn’t for speed, Andy Warhol would not be Andy Warhol. My work also. But the reason I stopped in the early 1980s – and I was also drinking a lot – was I no longer liked the work I was making.

Hour How about photographer Robert Mapplethorpe? He was very competitive.

Giorno We were close friends but we weren’t competitive because we weren’t playing the same game. He came to visit William and he shot the photos for one [GPS] album cover.

Hour You began NYC’s AIDS Treatment Project in 1984. How devastating has AIDS been in your life?

Giorno In the early years of AIDS an enormous number of friends died. Lots has changed but it was catastrophic back then. The worst of it, the tragedy of it, the part of being a gay person, was the idea of promiscuity: When AIDS came, everything I had championed and admired was catastrophic. It came to total defeat. You get so depressed your mind just closes down. But you go on. By a miracle I didn’t get AIDS.

Hour You must be pleased you began Giorno Poetry Systems in 1965. You’ve documented so many of our great artists, not just the Beat Generation.

Giorno I was just capturing and engaging the moment with the technology of the moment. At the time it was early telephone technology and vinyl. New technology does excite me [because] the intent is a fruition of things begun in the ’60s.

Hour What do you think about the state of spoken-word today?

Giorno The last 50 years has been a golden age of poetry that never existed before in the history of the world, without exception. In the last 50 years three or four generations of brilliant poets [began] connecting to vast audiences that never existed before, especially through the Internet. Back in Baudelaire’s time they printed 100 copies of his book. From slam to rap, poetry today is beyond one’s wildest dreams.