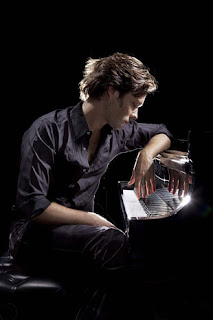 But as fast as the media builds up celebrities, it is also quick to tear them down. So it was no surprise the claws were out when Wainwright’s first-ever opera Prima Donna debuted at the Manchester International Festival in July 2009. Wrote Warwick Thompson of Bloomberg, “There were tears of joy in Rufus Wainwright’s eyes when he took his bow after the world premiere of his opera… There were some in mine too, though the joy sprang more from relief that it was over.”
But Wainwright soldiered on. Prima Donna  made its North American debut at Toronto’s Elgin Theatre at the Luminato Festival and won a Dora Mavor Moore Award for Outstanding New Musical/Opera in 2011, before being famously mounted the following year by the New York City Opera, with red-carpet friends Yoko Ono and Anjelica Houston in attendance – a fascinating turn of events since Prima Donna was originally commissioned by the Metropolitan Opera until a dispute over Wainwright’s decision to write the libretto in French led to an acrimonious split.

Most of all, Wainwright wanted Prima Donna  to play in Montreal. This summer, eight years after its debut in Manchester, Wainwright will get his wish when Prima Donna  will be performed at the Festival International de Jazz de Montréal.“It’s been a long and winding road to Montreal with Prima Donna ,” says Wainwright. “Having it performed in Montreal, especially at Salle Wilfred-Pelletier where I grew up going to the opera, is coming full circle in so many ways. I am also excited to be working with the great (Québécois) soprano Lyne Fortin, one of the first opera singers I ever saw perform, in La Bohème. I wish sometimes that Montreal had been more at the forefront with this project, but Montreal – and this is why I love this city – it is one of the great bohemian capitals and one of their traits is they like to be fashionably late. So this is exciting and it means a lot.”


The July 2 and 3 concerts will each be divided into two parts: first, the acclaimed, abridged 60-minute symphonic visual concert of Prima Donna  with three soloists (including Fortin) and a large orchestra led by American conductor Jayce Ogren, against a film backdrop by Italian director Francesco Vezzoli starring American artist Cindy Sherman as Maria Callas, and wearing Callas’ actual costumes; followed by Wainwright on piano accompanied by the orchestra, performing his greatest hits in the second half.

In his notes for Prima Donna, Rufus writes he “drew heavily from many of my own personal experiences as a performer, plus those of my mother.”

During our interview (my 24th or 25th with Rufus, I’ve lost count) Wainwright explains the diva in his opera “pays the price for a treacherous interview with a journalist” – and here Rufus laughs – “that draws very much on my own experiences in show business and what must be done to continue. As for my mother’s life, at the end of the opera, the opera singer’s voice really becomes a metaphor for her body. When my mother (singer-songwriter Kate McGarrigle, who died of cancer in 2010) was ill, there was a similar kind of acceptance she had to make about her physical state.”

Fortunately Kate McGarrigle was able to attend the Prima Donna premiere in Manchester in 2009. “That was really important” Wainwright says.

Since his mother’s death, he adds, “The best advice I ever got in terms of losing a parent – especially losing your mother – is that essentially your mother gives birth to you twice: once when you are born, and once when she dies. She gives birth to you again. That’s the best way I can explain it. It’s just a whole new world. There’s always the sadness, but there is also a whole new perspective. That’s life continuing.”

Wainwright has plenty of Montreal memories. There was the night he and his sister Martha sold T-shirts and posters during a McGarrigles concert at Le Spectrum: “Our mom and our Aunt Anna decided to let the kids take care of the merch booth and we were supposed to sell the posters for a certain amount of money and basically ended up giving them away, making deals!”

Wainwright famously honed his musical chops playing weekly shows at Montreal’s fondly-remembered nightspot Cafe Sarajevo on Rue Clark before moving to New York in 1996. “It was fun and boisterous, also a little bit intense because the people who ran the cafe were from the former Yugoslavia and they brought over that wild vibe with them,” he says. “It was a wonderful bubble that I experienced there, because it was devoid of any major labels or agents. It was just me doing my own thing.”

Wainwright also enjoyed Montreal’s gay scene, even after he left Montreal for New York. “I’m sure it’s treacherous today, it’s always been,” Rufus says. “I remember it was pretty down and dirty, especially since, with AIDS, New York kind of shut down. But Montreal remained pretty decadent and open. So I would come up (to Montreal) from New York to continue the lascivious fun!”

Wainwright is now married, to Jörn Weisbrodt, artistic director of Toronto’s Luminato Festival (“This is our last year in Toronto, Jörn’s last festival with Luminato, so we will be returning to New York”) and he is the father of Viva Katherine Wainwright Cohen, his five-year-old daughter with Leonard Cohen’s daughter Lorca Cohen (“It’s the only thing that tops opera!”). Meanwhile, his just-released album Take All My Loves: 9 Shakespeare Sonnets features nine adaptations of Shakespeare’s sonnets with guest appearances by the likes of Carrie Fisher and William Shatner. And he is busy writing his new opera Hadrian, about the gay Roman emperor and his lover Antinous, commissioned by the Canadian Opera Company and scheduled for their 2018-2019 season.

“It’s a much larger piece than Prima Donna: it’s four acts, there’s a chorus, dancers, at least 10 main characters, it’s a mammoth undertaking,” Rufus says happily. “What I love about my project is that it is very much rooted in the tradition of grand opera, big sweeping romantic statements and larger-than-life characters who ruled the world. It’s my Antony and Cleopatra moment – Hadrian and Antinous and the Roman Empire. There’s nothing couched about it.”

As for the annual McGarrigles / Wainwright concerts to benefit the Kate McGarrigle Fund at the MUHC Foundation, Rufus says, “This year we’re not doing them in Montreal or New York, were doing it in Nashville at the Ryman Auditorium, home of the famous Grand Ole Opry, with Emmylou Harris. And just the other day Emmylou was having coffee with Dolly Parton, so that’s all I’m going to say! One can pray! So come on down to Nashville!”.

Twitter.com/bugsburnettBottom of Form
Posted by Three Dollar Bill at 18:10