I did as instructed, lifted my legs up against a wall, threw them over my shoulders, then promptly threw out my back.

I lay cussing in agony for about 20 minutes, later wrote a column about it and made a fortune for every acupuncturist in the city.

But I will say that Paul Dawson has a pretty nice dick.

I also remember that before I stepped into the cinema for a media screening of Shortbus, I didn’t really want to sit next to anybody (I ended up sitting next to my fab drinking buddy John Griffin, then movie critic for The Montreal Gazette) just in case I got a hard-on (Ex-Centris wasn’t exactly the place for a quick tug-and-poke and, besides, John had to leave early).

I told that to my buddy Paul DeBoy – who co-stars in Shortbus and became Paul Dawson’s real-life boyfriend – when I caught up with him in October 2006 at the Hôtel de l’Abbaye in Paris where John Cameron Mitchell and the cast premiered Shortbus.

"I was worried about pulling a hard-on in front of everybody!" I cried.

But wait, it gets better: No less than John Cameron Mitchell will appear in-person to provide live 'director's notes' throughout the screening.

"The sex in Shortbus isn’t meant to titillate," Paul told me.

Clearly Paul didn’t have a problem showing off his own dick and ass, which for the record look pretty good.

It takes one to know one, I guess.

Join John Cameron Mitchell for a Pervers/Cité midnight screening of Shortbus at Cinéma L’Amour on August 12. Mitchell will appear in-person to provide live 'director's notes' throughout the screening. Click here for tickets.

The screening is the first of two events at which Mitchell will appear. The second is a Mattachine MTL for Pervers/cité with John Cameron Mitchell, a Montreal edition of the monthly queer NYC dance party Mitchell established with Shortbus co-stars Paul Dawson and PJ Deboy. Mattachine MTL takes place on August 16 at Sala Rossa. Mitchell will be joined in the DJ booth by Amber Martin, a longtime co-DJ of the New York Mattachine parties, and Montreal's own J. Ellise Barbara. Special guest performances by Alexis O'Hara and BiG SiSSY.

Check out the official Mattachine Party website at mattachineparty.com.

From the archives: Actor and director John Cameron Mitchell gave me a memorable HOUR magazine cover story in July 2001 when his cult film Hedwig and the Angry Inch screened at Montreal’s Just For Laughs International Comedy Festival.

We talked about how Hedwig really began back in 1994 at NYC’s famed drag-punk nightclub Squeezebox, where Stephen Trask – who would write the music and lyrics for Hedwig (John Cameron Mitchell wrote the text) – headed the house band and Mitchell’s boyfriend, Jack Steeb, played bass. 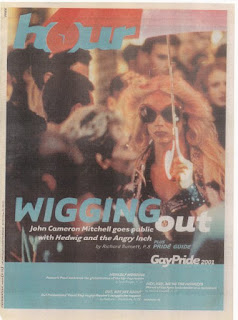 Mitchell worshipped the rock’n'roll singing drag queens at Squeezebox. So he began to rewrite covers of such songs as Fleetwood Mac’s Oh Well, Cher’s Half Breed, David Bowie’s Boys Keep Swinging and All the Young Dudes by Mott The Hoople, incorporating them into Hedwig‘s original concerts.

By 1998, Hedwig and the Angry Inch debuted at the gloriously rundown Jane Street Theatre in NYC’s West Village as a fully-fledged original punk/glam rock musical about a lonely girly-boy named Hansel from Communist East Germany who, after a botched sex change (which leaves him with the titular angry inch), flees Germany before the Wall comes down. Hansel morphs into Hedwig, who is neither completely male nor female, but a glam rock’n'roll queen reduced to playing dives while her former protégé and lover Tommy Gnosis performs in stadiums across America.

After Hedwig won a Village Voice Obie Award and the Outer Critics Circle Award for Best Off-Broadway Musical, the film adaptation won an award for best direction and the Audience Award for Best Drama at the Sundance Film Festival in 2001, Mitchell told me about the time he took a piss during one performance at the Jane Street Theatre: In the middle of the show he walked into the men’s john – in character, of course.

"I kept talking into the mic while I was urinating," Mitchell said. "Generally there was complete shock as I’d interview people in the toilet. But this old Irish drunk was both delighted and outraged and followed me on stage. So I let him regale his wife – it was her birthday – and sat down. Then when it was time, I gave him a big hug and sent him off on his merry way."

I also really like John because he also genuinely prefers diverse, mixed audiences.

"It just makes for a more interesting party," Mitchell told me. "You know, I think I needed to be more with gay people when I came out, in a more monolithic way. But then you grow up and realize you want a little variety. A lot of gay people only hang out with people who listen to the same music and have the same body and same gender. That’s boring and quite annoying. I feel like a freak among a majority."

Mattachine MTL for Pervers/cité with John Cameron Mitchell takes place on August 16 at Sala Rossa. Mitchell will be joined in the DJ booth by Amber Martin, a longtime co-DJ of the New York Mattachine parties, and Montreal's own J. Ellise Barbara. Performances by Alexis O'Hara and BiG SiSSY. Cover: $5 - $10 (Sliding scale, no one turned away for inability to pay).

The 2017 edition of Pervers/Cité runs from August 10 to 20. Click here for all of their events.