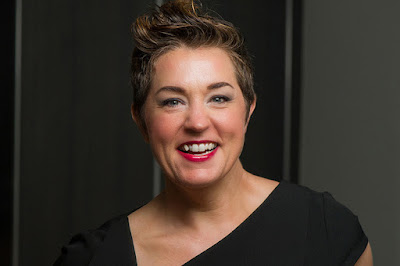 So when I told Moore that I had planned for this to be the “gay interview,” she happily replied, “Yes! Let’s queen it up!”

What does it feel like to be back in Montreal?

Better. This time I come here married, happy, have a puppy (named Floria), I want to walk around the city. The last time I was here my foot was injured, so I couldn’t do anything. I went to the gym – maybe! ­– and the grocery store. So when my wife gets here, we are definitely visiting the city, and we want to go see the drag queens at Cabaret Mado!

Congratulations on getting married to Nicole. Was it love at first sight?

Nicole’s sister is an opera singer and we were supposed to have met during a Thanksgiving feast with friends and other singers and coaches, but things fell apart and we were unable to make it happen. I apologized to everyone and said we’ll have to make this happen again. And (Nicole) and I were the only ones who made it happen again. Then we just kept making it happen again!

What was it like to play Regine St. Laurent in Montrealer Rufus Wainwright’s opera Prima Donna, and what is it like to work with Rufus?

It’s a shame to me that young, vibrant writers of new music often get panned for trying to write opera, as if it is some kind of unattainable, unapproachable, paradigm, when Puccini at the time he wrote Tosca was panned as well. So was Verdi at times for writing things that were too human,  that were too approachable, that weren’t high art. And I think to myself we are just repeating that over again when we don’t listen to these young voices. Rufus is incredibly talented. The writing, the scoring – although thick – is stunning to listen to and it was one of the most fun experiences working with him and we still remain friends today.

How invested in Regine were you?

To me, it was like reliving Maria Callas, Régine Crespin, all of these singers that have gone before me who potentially had suffered from the aging process that people never talk about in the singing world. People never talk about what it means to lose a little bit of grip in your later years and what that might do to a person who has lived a very unrealistic lifestyle of an opera singer. For me I felt like I could touch for a moment those singers of the past.

Do you see yourself in Regine?

I did. I saw exactly how this could happen.

Does your own future scare you?

No, because I know very well how to say good-bye.

Tosca is one of your signature roles.

It is. I could do it forever until I can’t. I don’t think I will tire of it and that is something odd for me because I do need a lot of diversity in my life. I read all kinds of things, I listen to all kinds of music, I’m never satisfied with living one life, I need my fingers in many pies. For me Tosca is endlessly challenging as a character.

Gay men love their divas. Is Melody Moore a diva?

Yes. I think the word diva is fabulous. If you can embody what a diva is – it is a powerful word, it doesn,t mean bitch to me – and it doesn’t mean somebody who is incorrigible, hard to deal with and is demanding – it means you know who you are, what you want and what you’re good at, and you show up and deliver the very best product that you can on any given day.

Do you have a huge ego? I mean, you must have had a big ego to get this far.

You know what? I think I got this far on ego. Then I killed it. I think I took the ego and said, ‘What are you doing for me, and what are you doing against me?’ And I saw it was more against than it was for. So I did a lot of work on myself and now I really believe that is not what is running the ship anymore.

Click here for my most recent 2016 interview with Rufus Wainwright.