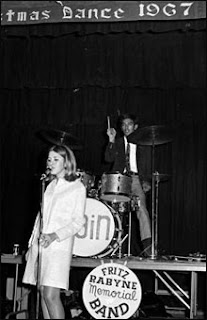 Back then Nicks was a student at San José State University and Forest attended Stanford University.

"I was a freshman and social chairman of my dorm," Forest recalls today. "Seeing a chance to make money by getting other dorms and fraternities and high schools to book the top local bands that I was hiring at my dorm, I created the David Forest Booking Agency. Most of the little groups were happy if they made $125 for four 45-minute sets. I'd make a $25 fee on top of that. But not Stevie's band, The Fritz Rabyne Memorial Band [later shortened to Fritz]. They'd only do three sets and wanted $150 net. I had to get my $25 fee 'on top' and they refused to do the 'must-do' frat-gig songs Louie/Louie, Gloria and - most importantly - Satisfaction."

David Forest went on to work for legendary rock promoter Bill Graham (who owned the Fillmore) before David Geffen asked Forest to head up the contemporary music division at CMA in 1970. There they moulded the careers of Leon Russell, James Taylor, Carole King, Van Morrison and The Carpenters, who, Forest says, "I took from a little boy-and-sister act to international headliners."

While Forest flaunted his gayness, Geffen was publicly closeted. "But we were open to each other," Forest says.

In other words, Forest went from rock to cock.

Now he's writing all about it, warts and all, in his upcoming memoirs. "I've just hired a writer, and I'm talking about everything - the arrests, prison, my famous clients. And there'll be a whole chapter just on Stevie."

Nicks appears to be the one client Forest was most fond of. "Fritz weren't as popular as Santana or Big Brother & The Holding Company, and [when] the Grateful Dead and Quicksilver Messenger Service got recording contracts, Fritz was still playing high schools. But I knew Stevie would be a star the night Fritz opened for Janis Joplin and Big Brother at the Fillmore. After her band members left I told Stevie, 'Stay and meet Janis.' Stevie looked at Janis and she saw herself in her."

Eventually the egos of the male band members killed Fritz.

"The boys didn't want to have a 'lead' singer, let alone a female lead singer," Forest explains. "They resented Stevie being the centre of attention. I did everything possible to convince them they were missing the boat. In the end Lindsey [Buckingham] and Stevie [quit] and Fritz didn't survive their departure."

Forest put together a showcase of the newly named Buckingham-Nicks duo at the penthouse of the Hyatt on Sunset but, Forest says, "It didn't produce any [record company] bidders."

So Buckingham-Nicks split with Forest, scored a Polydor record deal and came back to Forest (temporarily) in 1974 when Fleetwood Mac came calling. "I got the call from Stevie that Mick Fleetwood wanted them to join [his band]. It wasn't a very good deal - no part of the publishing. They were just paid sidemen, really. But that changed real quickly."

Now double-headlining solo with Rod Stewart on their current Heart & Soul tour, Forest is proud he gave Stevie her start.

"I'm tickled pink! I also think this tour is a big step upward for Stevie because I believe she will come off this tour better as a co-star of Rod than as a member of Fleetwood Mac."

When asked what it is about Stevie - whose 2011 solo album In Your Dreams was produced by Dave Stewart - that has made her a gay icon (there is even a famous all-star drag-queen tribute in NYC each spring called Night of a Thousand Stevies), Forest replies without missing a beat, "Gay men have always loved their dance divas, but Stevie has always appealed to the gay guy rockers. It's the outfits, the twirling, the persona. The gay guys just really dig her."