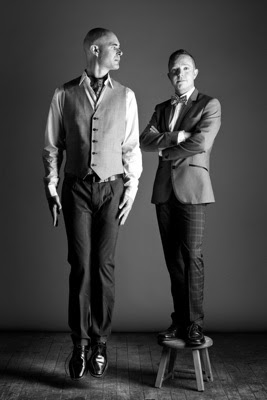 Montreal audiences have long adored local drag queens Gigi L’Amour and Pipi Douleur – a.k.a. transdisciplinary artists Stephen Lawson and Aaron Pollard – like opera lovers worshipping international divas at Vienna’s Staatsoper. Gigi and Pipi are royalty in this town. But during their three-week run as theatrical sensation 2boys.tv at Toronto’s Buddies in Bad Times Theatre in January 2009, something extra wonderful happened.

"We were on the cover of NOW Magazine, which apparently is very rare for people in performance," Gigi (Stephen Lawson.) told me afterwards. "So we were very excited! Then we had to move house during the second week [of our run] and we took all our bags out to the taxi. The driver opened up his trunk and," here Lawson’s eyes twinkle, "the bottom of his trunk was lined with our picture from the cover of NOW Magazine!"

Lawson howls with laughter: "That keeps it all in perspective – here today, gone tomorrow!"

Fresh from runs in Colombia, Chile, Argentina, Mexico, San Francisco, Glasgow, Iceland and other points afar, Lawson and Pollard premiere their new 2boys.tv production of Tightrope at Buddies in Bad Times Theatre on May 27 - "a high drag spectacle in memory of our forgotten."

"The theme of people who have disappeared kept arising in different communities,” Lawson told Xtra this week. “Whether it was political dissidents in Argentina, drug cartel victims in Columbia or aboriginal women in Canada, the idea kept presenting itself.

“We started to ask ourselves about our relationship to the disappeared in our own lives," he adds. "We were 11 and 14 respectively when the AIDS crisis began and feel quite strongly the absence of that disappeared generation of gay men.”

Developed over a three-year period, Tightrope incorporates a live musical element by Montreal performers Alexis O’Hara and Radwan Ghazi Moumneh. Backed by a virtual choir of singers, musicians and drag queens, 2boys.tv summon the shadows, apparitions and voices of the past - "phantoms of a liberationist gay culture that vanished with the onset of the AIDS crisis and a generational amnesia surrounding this loss."

2Boys.tv's Quebec roots make their approach to stage very different. "There is a stagnation in general within theatre in North America, with the exception of Quebec and that’s because Quebec is an aspiring nation-state," Aaron Pollard told me for an HOUR mag 2Boys.tv cover story a couple years ago. "It’s also about language, because artists [in Quebec] have to find a way to tour their work. So, yes, we tailor our work, reduce language in script-based work in order to make it more accessible [outside Quebec]."

"Hence the incredible tradition of contemporary mime, the circus, marionette theatre," Lawson adds. "These are all extremely healthy in Montreal but you don’t see this diversification in the rest of North America."

So what about New York City?

Pollard didn't miss a beat: "Who wants to play in New York? They think they’re so important you have to pay to play."


Tightrope
At Toronto’s Buddies in Bad Times Theatre May 26 to June 5
Previews May 26, Opens May 27, Runs to June 5