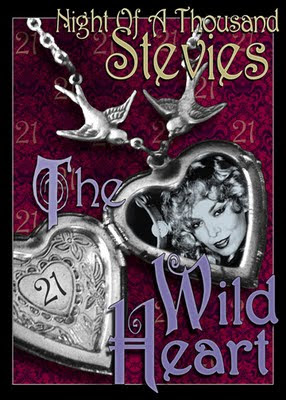 Night of a Thousand Stevies 21: "The Wild Heart," May 6 at NYC's Highline Ballroom

When my boozing buddy Jamie and I made our entrance at the absolutely packed, internationally famed Stevie Nicks drag queen rock’n'roll tribute Night of a Thousand Stevies (or NOTS) at the Highline Ballroom in Greenwich Village back in May 2009, New York City hadn’t seen so much trash since the Teamsters’ citywide garbage strike of 1990.

No, I didn’t trip and slide face-first into the gutter like I did on Bourbon St. in New Orleans one Halloween, but after Jamie and I spilled out of our cab, inside the Highline Ballroom I knew I was in deep trouble when my bartender told me she couldn’t serve me triple vodka-sodas because her glasses weren’t big enough.

"How much for the bottle?" I cracked.

I kept snapping pictures of men’s asses while some woman grabbed Jamie’s butt (I think it was a woman – she looked like Stevie Nicks!) when they danced at the bar.

But the real entertainment was on the stage. This was my first Night of a Thousand Stevies – and yes, folks, I shall be going back for more – so I thought we were going to get a whole lot of lip-syncing.

Instead what we got were real live performers, notably underground crooner Adam Dugas with harpist Mia Theodoratus doing an incredible version of Landslide; and Heather Litteer (a.k.a. Jessica Rabbit Domination) and her two backup singers rocking the house to Stand Back. Then Goon Squad – featuring Blondie’s Debbie Harry on lead vocals – destroyed the place with their balls-to-the-wall punk version of The Chain.

"The live [set] wasn’t as crazy as other years because we had to co-ordinate everything with the computers at the back of the room, which took some getting used to," says ab-fab NOTS co-hostess Hattie Hathaway (a.k.a. Brian Butterick), who produces NOTS with her fellow Jackie Factory NYC co-founders Johnny Dynell and Chi Chi Valenti. "But I think it was the best audience we’ve ever had – there were over 1,000 people. They brought so much energy, that’s why we kept turning on the house lights. They’re part of the show."

I have been to every major drag event in London, Sydney, Paris, New Orleans, Vegas and Montreal, and I’m telling you, NOTS is hands-down the most fun drag event I’ve ever been to. Revellers get dolled up à la Stevie, including past attendees Courtney Love, Cyndi Lauper and Boy George. Even Jamie and I wore blond wigs.

"I hope next year maybe Stevie will come," Brian told me afterwards.
.
Then last week the NYC nightlife legend (Brian was also a former roadie who helped debut such acts as RuPaul, Dee-Lite and the Red Hot Chili Peppers, and his drag alter-ego Hattie co-founded not just NOTS, but Wigstock back in 1984 with that other NYC drag icon, Lady Bunny) told me after I suggested perhaps Stevie will actually show up for NOTS at their 25th annual edition in 2015, ""Hmmm... it just might be a tad sooner than that. Stevie is doing quite a few shows in the area this year, right around the time we are doing NOTS [this year at the Highline Ballroom on May 6] – and that is something I don't think has ever really happened before. So she just might pop by and pay us all a visit. Who can say?"

Nicks (whose current Heart and Soul co-headliner tour with Rod Stewart continues off-and-on until June 26, when it winds down with an outdoor concert in Hyde Park in London) was scheduled to appear on the Today Show and Good Day NY this morning (May 3) to promote her just-released new CD In Your Dreams, as well as perform at a star-studded event thrown in her honour by her record label Reprise Records at NYC's Webster Hall on May 4.

But her publicist Liz Rozenberg (who also handles publicity for Madonna) announced on May 2 that Nicks has had to cancel several upcoming appearances in New York due to coming down with pneumonia and the flu. Nicks' doctor says Stevie must "stay in bed and not fly" until she gets better. Nicks has not, incidentally, cancelled her May 6 concert in Atlantic City.
Meanwhile, over at NOTS, the show must go on. "Stevie loves it!" Brian explained to me some years ago. "NOTS really took off when she mentioned it in every interview she gave, she was so pleased with it. She’s donated boots, a tambourine with a ribbon that she applied herself, and some [of her] artwork was auctioned off and the money given to charity."

For this year's event, Stevie's record label Reprise Records has donated a ton of Secret Love CD singles and videos, to give away to Stevie fans at NOTS on May 6.

Like Howie Klein – former president of Warner Records – told me over breakfast once, "Stevie is very aware of her gay fans and has donated personal items [that were] auctioned off [for charity] at Night of a Thousand Stevies, which we have encouraged her [to attend]."

But will Stevie show up this year? Says Brian Butterick, "Who can say?"

Essential buttplug  The Jackie Factory presents Night of a Thousand Stevies 21: "The Wild Heart," May 6 at the Highline Ballroom (431 West 16th Street). Tickets: $25. Surf to www.mothernyc.com/stevie/