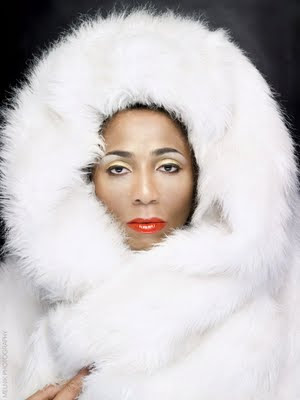 (May 29) I’ll never forget the night I got dolled up in my one-inch eyelashes, body-hugging black dress and Austin Powers-era Beyoncé afro-wig to go see my old friend, Montreal soul queen Michelle Sweeney, and her band headline Montreal’s Jello Bar nightclub. I looked nothing less than stunning. I mean, this bitch was ferocious! "I’m a whole lotta woman!" I told this cute guy at the bar, batting my eyelashes.

I don’t think he realized I was in drag until I sashayed past to the men’s room. Then I overheard him tell his friends, "I thought she was a woman!"

Clearly, this dumb-ass was blind. When I stepped out of the men’s can, he and his two friends blocked my way with their muscle-boy arms folded across their chests, and he snarled, "Ain’t you Richard Simmons!"  To which I replied like a snap-queen, "NO! I’m Richard Burnett!"

I then parted those bruthas like Moses parted the Red Sea and when I sashayed past my man, he grabbed my ass.

So, you see, I absolutely adore drag, can never get enough glamour and worship a worthy diva. And in Montreal no diva – and I mean NONE – come close to that city’s Queen of Soul Michelle Sweeney whom (I also love to point out) owns more wigs than every drag queen in Montreal combined!

The Oxford dictionary says divas are prima donnas. But in the gay lexicon divas have historically mirrored the gay experience – the quest for acceptance, the need to belong and a larger-than-life persona that demands – no, commands – respect no matter how naughty they are.

“It’s the charisma, it’s the fabulousness and taking pride in what you do," explains Cleveland-born Michelle, who commands respect as a big woman. "I love what I do. My nails and my hair might come off [onstage], but I give it my best. That’s why [gays] love their divas. And I have survived so many things in my life – raising kids as a single mom and all – and [gay audiences] they love a person that’s real. They want you to keep it real [despite] the false hair and eyelashes. My heart and soul is real."

Michelle – who says almost all the great soul singers have come from the church – adds, “I believe God made all of us. I say this all the time when people criticize gay people. Every time I’ve had a gay audience they have always been full of love. It raises you to your feet, the love they give me.”

Michelle cut her teeth playing the stages of Montreal, from co-starring in the Tony Award-winning musical Ain’t Misbehavin’ with local jazz great Ranee Lee (and stealing every scene she was in!!) at Montreal’s much-lamented La Diligence dinner theatre, to co-starring in the 1990 NFB award-winning feature film Strangers in Good Company, to bringing down the sweaty house at gay Montreal discos like KOX and Unity for 15 years! In fact, I rank her 1996 performance at Bad Boy Club Montreal’s internationally-famed Black and Blue circuit party – then drawing 20,000 revelers each year onto the Montreal Expos outfield at Olympic Stadium back when they hired such pop and dance legends like The Human League, Jimmy Somerville, Martha Wash, Ultra Naté and Loleatta Holloway – as that festival’s most breathtaking performance ever.

On this night Sweeney descended from the Olympic Stadium roof like an angel to join the Chorale Ganymède choir singing Reach Out by Sounds Of Blackness. "I had to walk along this narrow [catwalk] high above the stage," Sweeney recalls. "Now I’m not a small woman and here I was – oh my God – looking down at all those people dancing below!"

BBCM media relations director Carolyn Rousse remembers that moment like it happened yesterday. "That was back in 1996, the same year Girlina flew over the crowd in a spaceship and landed on the stage!" Rousse says excitedly. "That was my favourite B&B edition! There are things we did back then that just can’t be done anymore, like [Michelle Sweeney] on that stage coming down from the ceiling. Oh boy, that would not be accepted by the authorities now!"

Another night, at Montreal’s famed Divers/Cité Festival, when told that her 30-minute set at an outdoor Divers/Cité concert in front of 15,000 screaming fans was being cut at the very last minute because that day’s performers had gone long, and mostly because the headliner, Québécois pop icon Diane Dufresne would not go onstage one second later than 9 p.m., Michelle came to me at a table of journalists backstage. Whereupon, suddenly, Michelle’s band was granted one song at five-to-nine. Beautifully, Michelle did the longest version of I Will Survive in the history of pop music. When she walked off that stage 10 minutes later, the crowd was going nuts. And Dufresne? She still took the stage – 20 minutes later.

But after headlining at Montreal’s House of jazz nightclub for several years (check out Sweeney performing Georgia at a Montreal blues festival in the video clip above), in January 2009 Michelle left Montreal to front a touring jazz orchestra across Eurasia. Fittingly, after a concert one night last winter in the Kazak city of Almaty – the centre of Eurasia – Michelle and the band’s entourage accidentally discovered that city’s only gay bar. "When I walked in I was like their Big Mamma!" Michelle says proudly. "Oh my God, they all loved my clothes, my big hair, the drama! It was fabulous! And the woman who owns the bar had me sing I Will Survive."

Which goes to prove there IS such a thing as global gay culture.

That brings me to my final Michelle anecdote, when my partner-in-crime Bicente and I dropped by Montreal’s House of Jazz nightclub in 2006 to see Michelle belt out a few numbers. Now, I have long said of Michelle that she owns more wigs than every drag queen in this city combined – and there are hundreds of drag queens in Montreal!

"We’re going to a drag queen beauty pageant!" I replied.

Knives and forks dropped, every tourist in the joint turned their head as Bicente made a beeline for the front door and Michelle – quick on her feet and without missing a beat – cracked, "Now you tell those drag queens I want all my wigs back!"

Michelle Sweeney headlines Montreal’s House of Jazz on June 3 and 4, 2011
Posted by Three Dollar Bill at 15:49