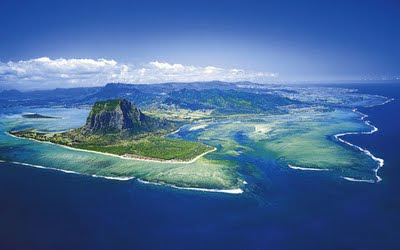 I knew I was in deep trouble when my travel buddy Vinnie and I were several shots into a bottle of absinthe hanging out with a couple friends in London for my birthday a couple years ago, in a nightclub that looked like the alien bar in the original Star Wars movie. We were in London town on our way to the southern African island-nation of Mauritius, where my family hails from.

But London is still the pulse of Europe, though I couldn’t find mine when we stumbled from Detroit, the absinthe bar, to the Shadow Lounge on Old Compton Street in Soho, an expensive disco where Graham Norton and Rupert Everett like to hang out with the beautiful people.

I felt like I was the star of a musical, like Cabaret, which we saw the previous night at the Lyric Theatre in the West End.

Except this production, which I saw with Vinnie and my mom, outclassed the original, from the fabulous nudity to the closing gas chamber death scene in a Nazi concentration camp.

"The most stunningly fresh and imaginative revival of a classic musical that I have ever seen," The Independent newspaper correctly opined.

London still bears the scars of WWII, a time when my British grandfather was a firefighter in London during The Blitz. My father grew from being a nine-year-old boy to a 16-year-old teen over the course of the war. One legendary true story had him and his best boyhood chum Ray carry home an unexploded German incendiary bomb. Miraculously, my grandfather – coming home from his firefighter shift – stopped them from pulling the pin as my dad and Ray curiously dismantled the bomb while playing.

After the war my father served in the British military in Germany from 1947 to 1949 as part of a crew in a Sexton tank.

A world away, in the southern African island nation of Mauritius, my mom’s father, Felix Laventure (or "Monpère" as we all called him), was the mayor of the capital city of Port Louis.

"As our civilization agonizes through anarchy," Monpère said in a February 1950 speech to various dignitaries on the occasion of Port Louis’s 100th anniversary, "what will remain of human liberty?"

Following my über-gay weekend in London, I flew to Mauritius with my mother as we revisited her homeland, which reminded me of other former British colonies Jamaica and Barbados in the West Indies.

"You gather the idea that Mauritius was made first, and then heaven, and that heaven was copied after Mauritius," Mark Twain once famously remarked. (He also said of Montreal that one couldn’t throw a rock without breaking a church window.)

Modern-day Mauritius is also one of just two African nations (the other being South Africa) to have a Gay Pride parade. Today (June 4), several hundred marchers are expected to take part in that country's sixth annual Gay Pride Rainbow Parade in Rose Hill. When I was there, over 350 brave persons courageously marched in the streets of Rose Hill. Afterwards, I tracked down the organizers at the Collectif arc-en-ciel.

"There is an underground network," parade organizer Nicholas Ritter told me. "Most gays here are married and live double lives."

Indeed, there are no gay bars in Mauritius ("You’d go at your own risk," Nicholas explains). In fact, there are just a couple that I know of in all of Africa, and they’re in Cape Town. But today, young gay Mauritians are standing up.

It reminded me of a NYC job with Human Rights Watch that I interviewed for some years ago, and think I lost because I said, "I believe we must protect our sources, but there also comes a time when individuals must stand up."

In fact, 50 years ago, my grandfather was so loved by the people the British appointed him as a government minister (better to have him on their side, they reasoned). But Monpère - after introducing a bill in parliament that would expropriate land from the rich plantation landowners, to create farming co-ops for the poor - was a political Robin Hood who was eventually forced into exile after he refused a diplomatic posting offered him through back channels by his island nemesis, Mauritius Governor-General Sir John Shaw Rennie.

"In those days the [city] administration could truly administrate," then-Lord Mayor of Port Louis Mayor Reza Issack (now a member of the Legislative assembly) told my mother and I when we visited him. "It was a grand era back then."

My mother’s life would have been radically different had she not come to Montreal. But I am grateful my grandfather refused the overseas diplomatic posting, otherwise I would not be here today to write this column.

My trip to London and Mauritius – from Cabaret to the Blitz, from Sir John Shaw Rennie to Monpère defying his British political masters, to young incredible gay Mauritians organizing their Gay Pride in Rose Hill – reminded me that in the end we must all stand up and be counted for. After all, what else is there to do?

June 4 post-parade Pride party at The Indigo nightclub (begins at 10 PM) on Facebook
Posted by Three Dollar Bill at 13:13