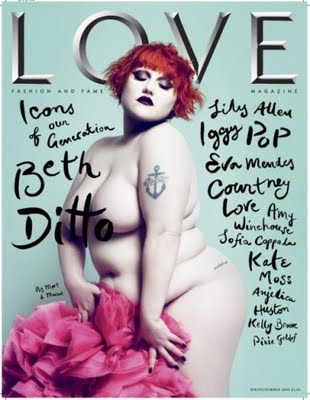 (July 30) I absolutely adore American rock star Beth Ditto. The last time her old band The Gossip played in Montreal, at Le Theatre National in the Gay Village, she popped into an unofficial Gossip pay-what-you-can benefit afterparty a couple doors over and danced and hung out with her fans for a couple of hours!

A few days before the concert I told Ditto that her local gig had been moved to a larger venue, from Sala Rossa on the Main to Le National. Ditto replied, "I’m so thrilled we’ve moved into a bigger venue in Montreal – you guys have always been one of our best audiences!" 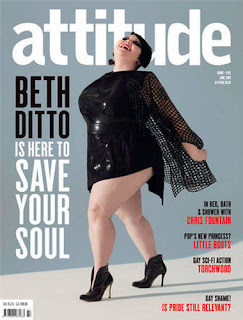 The first time The Gossip headlined in Montreal, at Divers/Cité in 2004, Montreal's much-lamented Hour magazine put the band on the cover and Ditto has had a love relationship with this city ever since.

"[It's] not because I don’t think she can handle it, but because that’s my life," Ditto told Contactmusic.com. "Say what you want about me. Say it to my face, say it behind my back, write it on the fucking bathroom mirror, I don’t care. But do not talk about the people I love."

It’s not quite the same this side of the pond: The adulation is equally intense but the audiences are smaller. But that is about to change.

After she notoriously complained to London’s NME magazine backin 2007, “If there’s anyone to blame for size zero, it’s not women. Blame gay men who work in the fashion industry and want these women as dolls. Men don’t know what it feels like to be a woman and be expected to look a particular way.”

Overnight Ditto – all 5-foot-2-inches and 200-plus pounds of her – became one of French couturier Jean Paul Gaultier's muses. 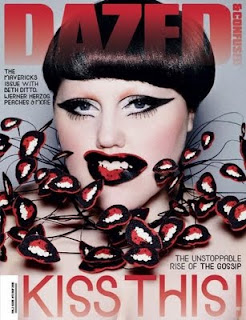 “I think everybody is beautiful and has a different kind of beauty,” Gaultier told me earlier this month. “It is always a question of perception and of presentation. Beth Ditto is fascinating by the way she moves and assumes her body. She represents freedom. She comes from a small town in the US, is voluptuous and openly gay. She is very sexy. I have used a lot of plus-size models in my show. They are part of the society, so why not of the fashion world?”

When I asked Ditto about her NME quote, she told me, "It was a crazy debate and I don’t blame gay men solely because women do it to each other too. Fashion is one of the few professions where gay men and women hold the reins of power. It’s a shame we can’t be more empowering. But [today] I’d never just blame gay men. I’m gay and I’d rather support my community."

But Ditto not only got the attention of Gaultier, but of another Gaultier muse - Madonna. After Ditto released her eponymous solo EP in March 2011, she  paid tribute to Madge with the music video for the excellent dance track I Wrote the Book (watch below). Shot at London's swank Grosvenor House by director Price James (Hercules and the Love Affair, Peaches), the black and white video takes visual cues from Madonna's Vogue and Justify My Love clips and features Ditto being woshipped by three hot male models in various stages of undress.


As for Ditto, she is fast becoming an iconic figure in the gay community. Which is fitting, because when she grew up, she herself worshipped the ground another gay icon - Cyndi Lauper - walked on. In fact, Lauper invited Ditto to co-headline Lauper’s 15-city True Colors tour in 2007, to help raise money for gay grassroots organizations across America.

"I was infatuated with Cyndi when I was a kid!"  Ditto, now 30, told me. "So much so I thought she was my sister! So it was amazing to tour with her and give back to the [gay] community. It’s nice hanging out with gay crowds where all your points of reference are understood."
Posted by Three Dollar Bill at 11:15