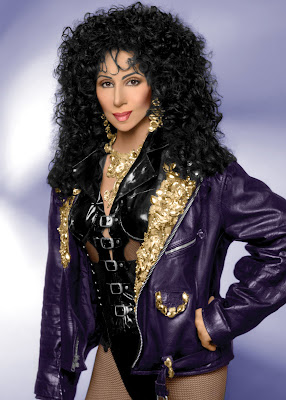 I saw famed Vegas female impersonator Eddie Edwards headline Montreal's packed Corona Theatre last night with his twin brother Anthony (together they are billed as The Edwards Twins) and, I gotta tell ya, Eddie does absolutely killer impersonations of Barbra Streisand and Cher. Killer, right down to their singing voices.

In my recent interview with Eddie in Canada's Xtra!, Eddie said he and his brother as kids began mimicking celebrities they saw on TV, celebrities like Cher and Carol Burnett. In fact, it was Burnett (no relation to me) who advised them to start their own impressionist Vegas act. “I had no idea I could make a living doing this,” Eddie says.

Eddie also revealed, “People [always] pretty much knew that I was gay. I came out of the closet when I was 14 because I didn’t want to live a lie, even though I was born into a deeply religious family. But religion didn’t make sense to me — I mean, why would God make me as I am and then disapprove of me? It didn’t make any sense.”

Edwards says he did not encounter any homophobia headlining in Vegas, which, while it has few gay bars, certainly ranks as one of the gayest cities on the planet. “I have never denied that I am gay and I’m very proud to be a gay man, though I’ve never had a boyfriend or husband because I am married to my career.”

“When Cher’s manager put photos of me dressed as Cher up in Cher’s gift shop at Caesar’s Palace, she came down to see the photos. Then I was invited to meet her backstage, and Cher was amazed the Edwards Twins sound exactly like Sonny and Cher. So she endorsed our show.”

When Bette Midler met Eddie Edwards, she exclaimed, “But you don’t look like a female impersonator!”

As for Streisand, Edwards says, “I put together photos and a DVD and left it at one of her concerts. The next morning her promoter called me and said Streisand thought I looked more like her than she did, and would I want to tour with her as her double to throw off the paparazzi? I was under contract in the Bahamas at the time, so I couldn’t do it.”


During his stay in Montreal Eddie also went out wandering around this city's famed queer Divers/Cité music, arts and culture festival where at the 1 Boulevard des Reves concert he introduced himself to Montreal drag legend Mado La Motte.

“What a wonderful city you have,” Eddie told me backstage at the Corona Theatre last night. “I can't wait to come back!”