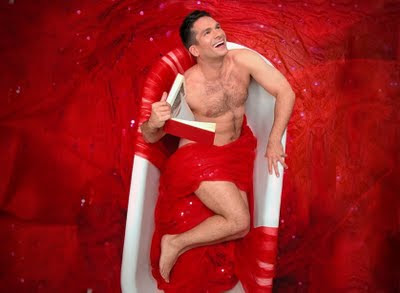 Puelo Deir in a publicity still from his one-man show You’ve Got to be Kidding!
(July 11) I call him the Larry Kramer of Montreal because whenever I need a good old-fashioned loudmouth gay activist quote for a news story, I know I can always call Montreal gay living legend Puelo Deir.

Deir, that fabulous bitch, got her start in Montreal hosting Queer Corps on CKUT two lifetimes ago, produced the benefit at Parc Lafontaine that helped pay the $5,000 in fines of those arrested at Montreal’s Stonewall, Sex Garage, in the hot summer of 1990. Deir also co-founded Montreal’s world-renowned Divers/Cité Festival with Suzanne Girard; and for years produced the Queer Comics showcase at Montreal’s Just For Laughs Festival. 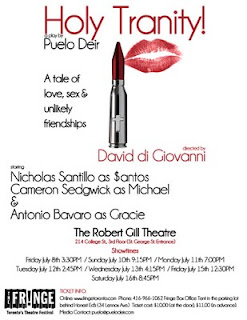 When he left Montreal in the late 90s to make more money in Toronto – where he was chief publicist for both Star TV and Space TV – Deir found his groove. But he nearly lost soul, so returned to Montreal where for the past decade he has worked closely behind-the-scenes with a Hollywood who’s-who, among others Christopher Plummer, Omar Shariff, Laura Linney, Richard Gere, Cate Blanchett, Whoopi Goldberg, Paul Giamatti (on Barney’s Version) and Heath Ledger.

“He had no ass,” Puelo once told me about Heath.

Another time, when news broke from Hollywood that Will Ferrell had died in a car crash, Puelo was the set publicist for the film Blades of Glory. I immediately called Puelo who held up his cellphone and asked Ferrell, who was standing next to him, “Are you dead?”

“The news of my death has been greatly exaggerated!” Ferrell cracked.

Another time, during filming of a TV series, Puelo and I picked up entertainer Lea DeLaria at her Montreal hotel and crashed the 15th anniversary party of my then-crosstown newspaper rivals, The Mirror. When I called my club-owner friend to make sure we wouldn't be barred from entering, he happily rolled out a red carpet!

But recent health problems forced Deir to recognize that – with the exception of his 2004 Montreal Fringe Festival one-homo show You’ve Got to be Kidding! –  for the last two decades he’s been working on the wrong side of the spotlight.

“Between chemo therapy, hip replacement surgery and looking death squarely in the face – when faced with all of that stuff, I began to realize that I had better do what I have always wanted to do," says the 40-something Deir. “We have just the here and now to do what we have always dreamed of doing. I went off on that other showbiz path. But inside I was meant to tell stories. And that’s what I’m doing now.”

So Deir has hired a talented and good-looking Montreal cast – Cameron Sedgwick, studmuffin Nicholas (Koy) Santillo and Antonio Bavaro, fresh from his Montreal Fringe triumph in Hedwig & The Angry Inch – to co-star in his musical comedy Holy Tranity!, directed by David Di Giovanni, the Montreal-based theatre-maker and associate director for The MAP Project that presented FOUR:Yourself at the Mainline Theatre in May 2011.

The cast is reading Holy Tranity! at the Toronto Fringe Festival this week.

“When I put my name in the lottery I originally intended to write a piece about bullying. In the meantime, I underwent a number of pretty severe medical challenges which left me extremely fatigued. I wasn't sure I was up to writing and producing a play. But 10 minutes before the Fringe program deadline, I came up with the title and synopsis, and my best friend created the artwork. Holy Tranity! is very different work I originally intended but it still speaks of self-esteem, death, suicide and the joy for life.”

Holy Tranity! tells the tale of three young adults – trans woman Gracie (played by Bavaro), twinkie $anto (Santillo) and soldier Michael (Sedgwick) just before the onslaught of AIDS changed gay life forever, something Deir himself witnessed on the front lines in Montreal when he started Divers/Cité.

For David di Gionvanni, a recent Concordia University theatre grad, Holy Tranity! is “somewhere between Cabaret and Christian mass, the backdrop of the rise of a 'gay disease.' Though never really stated, it has a pre-80s feel to it. We have Gracie, the high priestess Trans; Michael, ex-soldier and a real angel, and $antos – young, hung, and naïve. The play follows the three of them inside the nightclub walls. We never get to see outside, though, where something close to the apocalypse seems to be erupting.”

After their cast readings at the Toronto Fringe, Deir plans to flesh out Holy Tranity!  Initial reviews are mixed but clearly Bavaro is stealing the spotlight.

“I want it to become a big splashy musical!” Deir says. “If the response in Toronto is good, if the readings go well – these are young talented kids, and we’ll see an old crank like me working with young puppies. I’m still in shock that they’ve taken this on.”

Holy Tranity! at the Robert Gill Theatre at the Toronto Fringe Festival until July 16

Holy Tranity! on Facebook
Posted by Three Dollar Bill at 18:20