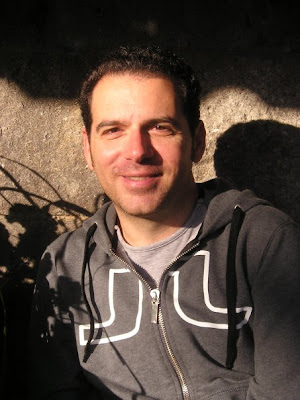 Steve Galluccio: “When it comes to Mambo Italiano on Broadway, I’ll believe it when I see it onstage.”

Galluccio will sign books at the 5 a 7 cocktail that is open to the public, and the original Piazza cast will be on hand to do a reading from the book.

Galluccio, meanwhule, is not sitting on his laurels. He is currently writing his guide to Montreal called Montréal à la Galluccio (Les Éditions de l’Homme) which will be published in the spring of 2012. And Galluccio recently secured the French Canadian rights for the hit Broadway play 39 Steps.

“[Producer] Denise Robert and I saw the play together in New York [last year] and absolutely fell in love with it,” Steve says. “Our next trip to New York we negotiated the rights for French Canada. So we’re bringing it to Montreal in 2012. We’ve hired our cast and crew, our director is Benoit Pelletier and the translation was done by [theatre veteran and 39 Steps stage manager] Lucianna Burcheri. We start rehearsals in November and previews will begin in June 2012.”

Adds Steve, “We will not be presenting the play as part of a festival or theatre season. We’re doing this on our own, likely in several different theatres. So there is risk involved.”

Meanwhile, what about that planned Broadway musical based on Mambo Italiano with renowned NYC producers Jean Cheever and Tom Polum, whose rock musical Toxic Avenger did boffo business Off-Broadway?

This past January, when we last spoke about Mambo on Broadway, Steve told me, “It’s supposed to go for the 2012-2013 season but it’s very hard to get something done on Broadway right now. I don’t think we’ll break the show on Broadway. It takes a lot of time and patience. Not to mention the average cost of a Broadway play now is around $2 million to $2.5 million. The reality of doing theatre in New York on Broadway is so different than the reality of doing theatre here [in Quebec] where everything is spoon fed to you. You get money from the government, you put your play on for four weeks and then you go on to your next play. In New York you have to find investors and it may close after three weeks. There are so many plays that close in New York that it’s such a big gamble for everybody.”

By this week not much had changed in New York.

“The producers are still very excited, but they’ve been very excited for three years! Their option expires later this year,” Steve notes. “So when it comes to Mambo Italiano on Broadway, I’ll believe it when I see it onstage.”