CANADA'S MOST FAMOUS TRANSSEXUAL NINA ARSENAULT SAYS, "I LOOK LIKE A CYBORG" 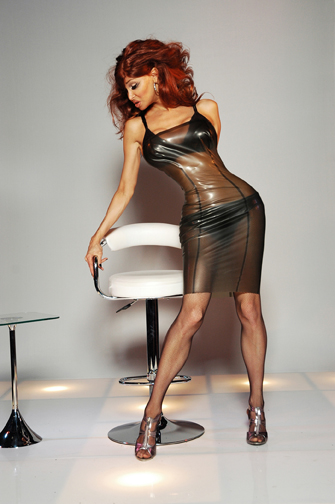 This interview originally ran in my weekly Abominable Showman column in the February 12, 2012, edition of The Charlebois Post - Canada ("All Canadian theatre... all the time"). All photos courtesy Nina Arsenault.


It’s true that the thrill of seeing Canada’s most celebrated transsexual Nina Arsenault step onstage for the first time in her graphic autobiographical one-transwoman show The Silicone Diaries in Montreal back in 2010 was pure voyeurism.

This thrill cannot be duplicated with mere videos or photographs. Observing Nina’s body and what she has done to it is a voyeuristic sensation completely rooted in the real. And by god, with her eye-popping 36D-26-40 figure, Nina Arsenault could pose in Penthouse.

The hardest part of my transformation was when I was living as a woman but still looked masculine and people would make fun of me on the street," Nina told me before her Montreal Silicone Diaries run.

"They'd yell things out of their car. I realized there is a double standard for transsexuals, because it you're a beautiful transsexual, people will accept you more easily. If you 'pass' you will be more accepted. You may not even be noticed. But if you don't pass... That's what really hurt me - people don't see you as human." 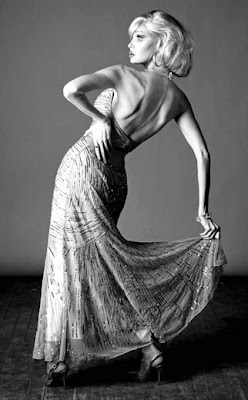 I once asked famed NYC tranny (and photographer Dave LaChappelle's muse) Amanda Lepore what she thinks she looks like, and Lepore replied, “There is something alien about my face – there is something spacey about me. If I dressed like Lady Gaga, [my face] would get lost. But because I dress retro, vamp and classic, the [alien] qualities come out more.”

Nina Arsenault is equally frank. “I look like a cyborg,” she says.

But it wasn’t always so.

The first scene in The Silicone Diaries is set in the Golden Horseshoe Trailer Park of Beamsville, Ontario, where Arsenault lived with her parents and brother until the age of six. In this scene, young Nina (then Rodney) and the local trailer park boys gather to look at a stack of Penthouse magazines. Arsenault’s tour-de-force retelling of her life documents her path from the Golden Horseshoe Trailer Park to becoming a sex worker to pay for all of her surgeries (which so far have cost her $200,000). Today, 30 years later, it is Nina who looks like she could pose for Penthouse.

“My parents are generally supportive, though my mom thinks I’m too sexy,” Nina admits. “She thinks I didn’t need to get my breasts done so large and my lips so big. And she thinks I wear too much make-up. She’s worried about my life being difficult but now that they've come to see my plays, they get a kick out of how audacious I am.”

The Silcone Diaries climaxes at the 90-minute mark with a drawn-out and narcissistic recreation of Nina’s infamous “Crying Game-style collision” with Pamela Anderson’s ex-hubby, rocker Tommy Lee, in Toronto’s hipster Ultra club back in 2006.

“He was in the sectioned off VIP area and the place was packed with star fuckers, silicone-enhanced women with bad extensions,” Nina recalls. “These wanna-be Pamela Andersons were intentionally trying to capture his eye. I just happened to be there and he picked me out of the pack to come over and sit on his lap.”

“Was he polite?” Nina asks rhetorically. “I think he’s a laidback guy who’s seen it all. I had the sense that he's an adventurous guy with a wild sense of humour and a really big heart.”

“Among other things,” I crack.

The way Nina has reshaped her body reminds me of Pete Burns of the 1980s Brit-pop band Dead or Alive, who says his body is an ever-changing piece of art.

“I feel the same way,” says Nina, whose transition and (ahem) body of work is well-documented on her website for all to see. “And from my body, I spin off other arts, like photographs of my body, or this play about my body. The next phase of my work will document the signs of aging. I don’t really see myself ever stopping. I’ve always taken pictures of every stage of my life and videotaped all of my surgical procedures."

When I asked Nina if she still goes for touch-ups every now and then, she laughed heartily.

“Well, I didn’t go for five years! I got really sick of it, [especially after] putting all those strange dicks in my mouth [to pay for it all]!” Nina laughs again. “So I took a break. People were beginning to think I was addicted to plastic surgery and I thought I looked as good as I could possibly look. But I don’t think I could let my face age naturally at this point. Because I don’t have a natural face. Once it starts dropping I won’t look like an old woman. I’ll look quite strange, I think. We always say, ‘Once you’ve had this much work done, you’re always in the game.’”

Just like Cher and Joan Rivers. “Yeah, they’re in the game,” Nina agrees. “Imagine if Joan Rivers let that face fall and those cheeks started sliding down? It wouldn’t look right.”

The Silicone Diaries is not so much about a boy becoming a girl as it is about beauty.

Nina’s self-perceived transition from ugly duckling to plastic Barbie doll is at the heart of The Silicone Diaries – dramaturgy by Judith Rudakoff and directed by Brendan Healy (also artistic director of Toronto’s Buddies in Bad Times Theatre where Silicone Diaries debuted in 2009) – though it is evident her sensibilities are clearly informed by gay and drag culture, much like the sashaying work of Mae West.

When I saw Silicone Diaries at Montreal’s Théâtre La Chapelle, I felt the final 30 minutes (following her pivotal scene about meeting rocker Tommy Lee) were something of an anticlimax and could have been condensed. Still, the rapt audience sat on Nina’s every word and couldn’t take their eyes off that body, proving that deep down inside we are all voyeurs. For challenging audiences in this way Arsenault was honoured by the Canadian Civil Liberties Association in 2011 for Excellence in the Arts.

Arsenault is now set to capture hearts and minds in Vancouver too.

“At some point looking beautiful became more important than looking like a woman," Nina says. “It became more important than looking natural. And I don’t think my transition will ever end because my body is always changing, always aging. Losing beauty, faded beauty – I don’t think my transition will ever be over. Maybe one day I’ll even decide to get my pussy.”
The Silicone Diaries starring Nina Arseneault, at the The Culch / Vancouver East Cultural Centre (1895 Venables Street), February 14 – 25. Box Office: 604-251-1363. Click here for more info.
Follow me on Twitter and Facebook.
Posted by Three Dollar Bill at 16:55