When I first met rock singer Sass Jordan some years ago, it was at the opening bash of the gorgeous Nelligan Hotel in Old Montreal after way too many glasses of Moët & Chandon champagne. I kept yakking away while Sass took off her shoes and told me, “My feet are fucking killing me.”
That’s all I remember.
When I interviewed Sass a couple years later, she actually remembered me. “You were awesome!” Sass laughed.
OK, awesome might be a tad overstating it. But once again Sass and I got along like a house on fire and we ended up blabbing about her portraying one of my idols, the original woman rock star, Janis Joplin, in the critically-hailed  off-Broadway musical Love, Janis.
“It was the hardest goddamn thing I ever did,” Sass told me. “It was four nights a week for three months. It was exhausting. I was never a fan of Janis until I did [the play]. Singing [like] Janis isn’t an easy thing to do but I did really, really well.”
These days it takes someone like Sass Jordan to generate new interest in an old singer like Joplin, who died in October 1970. In my case, it took Janis Joplin to interest me in another female blues singer, Bessie Smith, who died back in September 1937.

Now Detroit blues and gospel singer Miche (pronounced "Mickey") Braden – after portraying Bessie Smith on stages across America and Off-Broadway in the smash musical The Devil's Music: The Life and Blues of Bessie Smith – brings her critically-hailed tribute to Bessie Smith to the Montreal International Jazz Festival this month.
“I had such a great relationship with the musical’s director Joe Brancato because we’d done the musical Lady Day at Emerson's Bar and Grill together before,” Braden says. “Afterwards he asked me,’ What would you like to do [next]?’ So I said Bessie Smith, because I knew she had a story to tell.”
The daughter of a preacher, Bessie Smith overcame Southern poverty to become the greatest and most influential classic blues singer of the early 20th century, earning the title “Empress of the Blues.” She was born to a poor family in Tennessee sometime between 1894 and 1900 and joined the Moses Stokes Company’s travelling (vaudeville) show around 1912, initially as a dancer. Ma Rainey, “Mother of the Blues,” would mentor Bessie Smith whose first recording, Down Hearted Blues, was a smash hit in 1923. The rest, as they say, is history.
“Our play takes place [the night of Smith’s death] in a ‘buffet flat’ which is what they called the place where African-American artists could gather after their shows,” Braden explains. “It was here that Bessie was able to be herself. In fact, the whole audience becomes black.”
The musical is split between dialogue and musical performances. It is also quickly evident that portraying Bessie Smith is very much a labour of love for Miche Braden who – like Bessie Smith – is a bisexual woman currently in a longterm lesbian relationship. 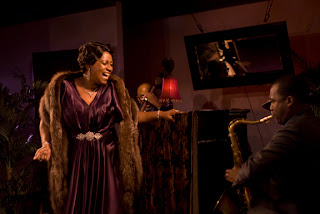 “I [also] wish I was getting paid as much as Bessie was back in the day!” Braden cracks, then adds, “Bessie Smith to me really is the key performer who brought blues to the forefront. Even though theatres were segregated, everybody went to see her. Before Bessie, black female performers basically played on the T.O.B.A. circuit – short for Theatre Owners Booking Association but a nickname for ‘tough on black asses.’ It was basically the Chitlin circuit. But Bessie released a record that became the first million-seller.”
The Devil's Music: The Life and Blues of Bessie Smith recounts Smith’s amazing life and career, her male and females loves and losses as Braden reinterprets such songs as St. Louis Blues, Need a Little Sugar in My Bowl and Nobody Knows You When You're Down and Out.
On September 26, 1937, Smith was critically injured in a car accident while travelling from Memphis, Tennessee, to Clarksdale, Mississippi. Legend has it she died after being refused admission to a “whites only” hospital in Clarksdale – a myth that formed the basis of Edward Albee’s 1959 one-act play The Death of Bessie Smith. 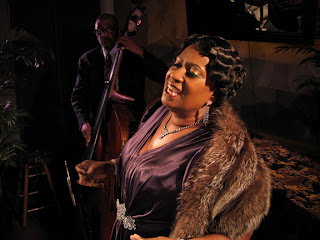 Braden, meanwhile, has been playing Bessie for 12 years now, ever since she premiered the musical at the Penguin Rep Theatre in Stony point, New York, back in 2000. “And I will continue to do this play until wiggling my butt does not look sexy!” Braden laughs. “I will play this role until the day I go!”
That’s because Bessie Smith remains one of the world’s great pop and LGBT icons.
“And as a black woman, Bessie Smith did everything I want to do,” Braden says. “She had it all. She was a producer, a choreographer and songwriter. I can’t say I’m patterning myself after her but these are the kind of women I want to portray on the stage because they matter.”
Which is why after drinking champagne with Sass Jordan at the Nelligan Hotel in Old Montreal, I went home and read up on Janis Joplin who, I discovered, paid for Bessie Smith’s tombstone.
Smith died on September 26, 1937, but her grave remained unmarked until August 7, 1970, when Joplin and Smith’s housemaid Juanita Green bought and erected a tombstone.

But I leave the final word to Miche Braden who tells me, “Bessie recorded about 150 records but the only video we have of her is in [the reels for] St. Louis Blues, so I couldn’t exactly imitate her. I had to create her through my own experiences. So there’s a lot of Bessie in me and a lot of me in Bessie.”
The Montreal International Jazz Festival presents The Devil's Music: The Life and Blues of Bessie Smith at the Cinquième Salle of Place des Arts, continues through July 7 at 7 p.m. nightly. Click here for tickets and more info.
Click here for the official website for The Devil's Music: The Life and Blues of Bessie Smith.
Follow me on Twitter and Facebook
Posted by Three Dollar Bill at 10:02