INDIGO GIRLS STILL FRESH AFTER 30 YEARS ON THE ROAD 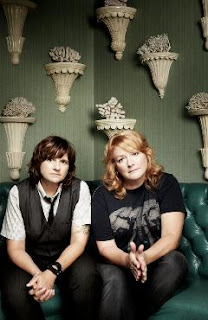 Amy Ray remembers the day she and her Indigo Girls musical partner Emily Saliers opened up for the Grateful Dead in front of tens of thousands of Deadheads.

“We’ve been touring for [nearly] 30 years, and that really remains the most memorable concert for me,” Ray says. “I looked over to the side of the stage and there was Jerry [Garcia] watching us. The stadium was full and the crowd loved us. The experience was so surreal, it was a formative experience for me.”

Today, almost two decades later, the Indigo Girls are back on the road with a full band – The Shadowboxers, a young Atlanta five-piece – headlining concert halls across North America, including Toronto (Feb 20) and Montreal (Feb 21).  “We’ll play songs from every record, and because the band has three really great vocalists, we’ll have rich vocal harmonies.”

That’s a long way from when the folk-rock duo first met in elementary school and began performing together as high school students in suburban Decatur, Georgia.
“We were so young and I was like, ‘Oh, that’s the other person [at school] who plays guitar.’ Emily was a year older than me, and we both ended up in our high school chorus together, which was like being in a drama club or something,” Ray remembers. “We got to be friends; there was a talent show and from there we learned a bunch of cover songs. We got a standing weekly gig at Good Old Days [Café, in Atlanta], and then we played at The Dugout in college.”

Ray and Saliers renamed themselves the Indigo Girls in 1985, then were – during the female singer/songwriter wave of the late 1980s – signed to Epic Records in 1988, scoring their first big hit with “Closer to Fine,” a collaboration with Irish band Hothouse Flowers.

“Emily wrote that song, musing about academia, this insular place which doesn’t have all the answers but you think it does. It’s an ‘I just graduated from college and what do I have?’ kind of song. She played it for me as we sat on a sidewalk [outside a club they played in Atlanta], and I went, ‘Oh my god, that’s incredible!’ We knew it was a great song, but we’ve never approached our career in that way.”

They may not have won that Grammy, but the Indigo Girls have gone on to international acclaim and won the hearts of legions of fans around the world, gay and straight.

“Gay audiences have been fundamental to our career,” Ray says. “They’ve stuck with us through thick and thin.”

Ray says she cried when Barack Obama referenced Stonewall in his 2013 presidential inauguration speech. But she quickly points out, “Obama has become hugely outspokenly pro-gay in recent times, but there’s still more than half the states have job discrimination, [where we] can’t get married legally, have high suicide rates among young people, not to mention a lot of issues in the trans community, issues about race and class. So there’s still a lot of work to be done. I appreciate where we are; it’s true we’ve made all this progress, but I think there are many grassroots movements that aren’t about marriage. The battle is not over, and we don’t want to leave anybody behind.”

The Indigo Girls have done much over the years to help promote gay civil rights in America, including on Cyndi Lauper’s True Colors tour.

“Cyndi Lauper is a hero,” Ray says. “The thing about Cyndi is we met her years ago when we first signed to Epic and played a festival at Martha’s Vineyard in Cape Cod, and she came up to talk to us. I remember being starstruck, and years later, to be invited on her True Colors tour -- it was one of those moments, just hanging out with one of your icons.”

After 28 years on the road, the Indigo Girls have become queer icons, too. Just don’t tell that to Amy Ray.

“We’re flattered, I guess, but we don’t think of ourselves that way, as living legends,” she says. “We’re just a part of this broader community where so many others have done heavy lifting in the trenches. They are the ones we should celebrate. I don’t care about any of that legend status.”