I’ve interviewed Lambda Literary Award-winning cartoonist and author Alison Bechdel – whose groundbreaking biweekly comic strip Dykes to Watch Out For was syndicated in over 70 alternative newspapers around the world for 25 years – many times over the years, and she always gives good quote. 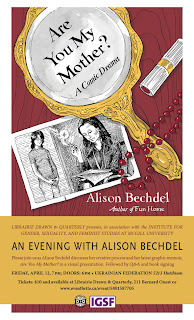 See for yourself when Bechdel will discuss her creative process and latest graphic memoir, Are You My Mother?: A Comic Drama, in a visual presentation in Montreal on April 12.

Bechdel’s Are You My Mother? is a graphic memoir about her own Mom. In fact, back in 2003, before Alison retired her Dykes to Watch Out For cartoon strip, she told me, “I never thought this would be my career. When I started out my mom was not happy. Her first response was, ‘You’re not going to do this under your own name, are you?’ She came around, though, and is now really supportive. She says she’s proud of me."

Are You My Mother? is a sequel to her  2006 bestselling memoir Fun Home: A Family Tragicomic which told the true story of Bechdel’s coming out, as well as the discovery that her own father was gay.

Fun Home was eventually named a Best Book of the Year by Time, Entertainment Weekly, New York Times, People, USA Today, Los Angeles Times, Village Voice and The San Francisco Chronicle, but when the book was first published, Alison admitted she was nervous.


“The family reaction is just starting to happen,” Alison told me at the time. “I call my mom every couple of days to find out what’s happening. My aunt says she read about it in People. And my mother’s a funny character: She’s interested in the publicity surrounding my book, but she says nothing about the book. I don’t think she’s read it. I’ve shown her drafts and galleys over the years. She’s a very private person. I feel brutal for putting her through that. It’s something I had to do but I still feel guilty.”

Clearly – with the publication of Are You My Mother?– Bechdel has come full circle.

Still, many faithful Bechdel readers like myself miss her old Dykes to Watch Out For cartoon strip, which made her a legend in the newspaper biz: Her trailblazing comic strip was syndicated in 70 alternative newspapers for a quarter-century.

“I feel part of what my strip was concerned with over the years was to document the changes in attitude [to gay life], not just from outside, but [also from the] inside – how we think of ourselves,” Alison told me in 2009.

“I think we do like ourselves better,” Alison replied. “I think a younger generation of people has grown up and are [now] running the world… So, yeah, attitudes are changing.”


Spend an evening with best-selling and critically acclaimed author Alison Bechdel at Montreal’s Ukrainian Federation (5213 Hutchison) on Friday April 12 beginning at 7 pm. The event is presented by Montreal’s Drawn & Quarterly bookstore, in association with the Institute for Gender, Sexuality, and Feminist Studies at McGill University.

Admission is $10. Click here for tickets and more info.

A Q&A and book signing will follow. $5 off all books purchased at the event.