THE TRUE COLOURS OF CYNDI LAUPER

But few people know that New York City’s True Colors Residence for homeless LGBT youth — which Lauper’s non-profit True Colors Fund built in partnership with New York’s West End Intergenerational Residence — was inspired by her close long-time friend Gregory, who was kicked out by his parents at the age of 12 when they discovered he was gay. “Gregory slept on park benches,” Lauper says today.

Shortly after Gregory died of AIDS in 1985, “True Colors” (written by songwriters Billy Steinberg and Tom Kelly) was offered to Lauper.

Lauper recently told me that on opening day, “I put a little plant for Gregory in their garden.”

Fresh off winning Best Original Score at the 2013 Tony Awards, for the hit Broadway musical Kinky Boots (“I didn’t stop to think I was the first woman to win that award [solo because] there were a lot of men involved, people who understood me, like [playwright] Harvey Fierstein”), Lauper is currently in the middle of a world tour celebrating the 30th anniversary of her breakthrough album, She’s So Unusual. 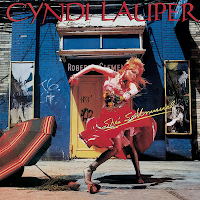 She’s So Unusual made rock and roll history: it catapulted Lauper to international stardom as the album sold more than 22 million copies worldwide and Lauper became the first female singer to have four top-five singles from one album on Billboard’s Hot 100 chart. She then won Best New Artist at the 1985 Grammy Awards.

“I won one [award], but that year everybody looked at me to be the next Michael Jackson and leave with an armful [of Grammys],” Lauper says. “We were really the little train that could. I mean, the videos that I did cost about $38,000; the top one we spent maybe $60,000. Meanwhile, Michael Jackson was making movies!”

Lauper also fought hard to ensure the memorable “Girls Just Want to Have Fun” video was multiracial and intergenerational. When MTV refused to air Lauper’s videos, she got into the ring with World Wrestling Federation champ Hulk Hogan and company. “The WWF enabled ‘Girls’ to be played on TV — they weren’t playing it on MTV or the radio. It started there. It enabled me to be heard. And I had a great time doing [the WWF]. I had a lot of laughs.”

Lauper also says “Girls Just Want to Have Fun,” written in 1979 by Robert Hazard, was originally misogynistic. “Just by having a woman sing it changed it. The song was a puzzle until I asked the guitar player to play a Motown kind of riff. Then we had a reggae riff with the electronic beat, and that’s when ‘Girls’ really came into shape.

“One of the big influences was ‘The Safety Dance’ song by [Montreal band] Men Without Hats. Before that [‘Girls’] was a mess and we weren’t going to do it. You change a few things, change a few pronouns, and you can actually make an anthem that will affect people, as opposed to just having a hit song.”

Looking back on her career, Lauper, now 59, says, “I didn’t want to be the little sex-symbol girl. I’m the kind of person if you tell me, ‘This is how it’s done,’ I always, always think, ‘Okay, that’s how you know it. Maybe there’s another way.’ If they say no to me, in the back of my mind, I’m like, ‘For you, maybe, not for me!’ I never fit in with normal anyway: I wasn’t Madonna, I wasn’t going to be like Prince or Michael. I wasn’t going to be like any of them. The best I can do is to find my own authenticity. I wanted to define a different kind of sexuality where a woman could be who she was and be revolutionary. That really was against the grain, and that it caught on was a miracle.”