Bugs' interview with Shyma Selvaduria originally ran in the November 2013 issue of Fugues magazine
The last time I interviewed author Shyam Selvadurai was way back in 1998 when his sophomore book Cinnamon Gardens shot up the bestseller charts. He was a young sensation then, still riding the triumphant success of his 1994 debut novel Funny Boy. 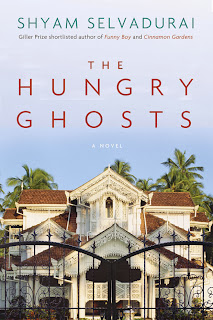 “I experienced a lot of pressure when I wrote my second novel, Cinnamon Gardens,” Shyam told me recently. “It’s not just an external pressure, it’s also internal. You want to achieve a higher goal. Each book has its own problems and challenges. I remember I met [2013 Nobel Prize-winning author] Alice Munro soon after Funny Boy came out and she asked me how I was dealing with all the pressure. I told her I was having second-novel syndrome and Alice replied, ‘I’m having ninth-book syndrome! It never gets easier.’”

Shyam Selvadurai was born in 1965 in Colombo, Sri Lanka, then came to Canada with his family at age 19 and grew up in Toronto’s sprawling suburbs.

“Toronto has and hasn`t changed – some of the suburbs are just grim, but they are more ethnic than when I came and people have learnt to make lives for themselves,” says Shyam, who today divides his time between Toronto and Colombo where he is the founder and Project Director of Write to Reconcile, a creative writing project in English undertaken by The National Peace Council of Sri Lanka. Selvaduria spends up to five months each year in Colombo.


“The suburbs of Toronto are a grim place for immigrants, but it is a place where they – like my parents – can forge a new life. When I go back there now I don’t feel nostalgia, but I do feel contentment. I no longer live in Toronto’s suburbs so I don’t feel l trapped. When I was younger, I couldn`t wait to finish university so that I could get the hell out of there,” says Shyam, who got a B.F.A. from York University where he studied creative writing and theatre. “I even lived in Montreal for 18 months, in 1991 – 92. Then I ran out of money and moved back into my parents’ basement and wrote Funny Boy.”

When Funny Boy was published, The New York Times and London’s The Literary Review both raved, and the book would go on to win a Lambda Literary Award. “But I didn’t do the rock star thing,” Shyam says. “When people on a plane sitting next to me ask me what I do, I tell them I’m a teacher.”

While he is proud Funny Boy did so well, he is also a little dismissive of book awards in general. For instance, he never knew that Funny Boy was nominated and then won a Lambda Literary Award.

“Nobody thought to tell me!” he says incredulously. “But winning [an award] is like a lottery ticket. That’s all it is, it’s a crapshoot. Whether you win or not does not mean your book is good. The good thing about awards is it brings you more exposure, and the more exposure you have, the more books you sell, and the more time you have to write another book.”

It took Selvadurai over a decade to write his new book, The Hungry Ghosts, which he began writing in 1999. As his publisher Random House explains, “In Buddhist myth, the dead may be reborn as “hungry ghosts” – spirits with stomach so large they can never be full – if they have desired too much during their lives. It is the duty of the living relatives to free those doomed to this fate by doing kind deeds and creating good karma. In Shyam Selvadurai’s sweeping new novel, his first in more than a decade, he creates an unforgettable ghost, a powerful Sri Lankan matriarch whose wily ways, insatiable longing for land, houses, money and control, and tragic blindness to the human needs of those around her parallels the volatile political situation of her war-torn country.”

The novel centres around Shivan Rassiah, the beloved grandson, who is of mixed Tamil and Sinhalese lineage, and who also – to his grandmother’s dismay – grows from beautiful boy to striking gay man.

“As the novel opens in the present day, Shivan, now living in Canada, is preparing to travel back to Colombo, Sri Lanka, to rescue his elderly and ailing grandmother, to remove her from the home – now fallen into disrepair – that is her pride, and bring her to Toronto to live out her final days. But,” the hardcover dustjacket notes explain, “throughout the night and into the early morning hours of his departure, Shivan grapples with his own insatiable hunger and is haunted by unrelenting ghosts of his own creation.”

“The Hungry Ghosts is also a very Buddhist novel, with Buddhist themes,” Shyam tells me. “It is about what it means to be like someone like me out in the world. Without being autobiographical, this book is who I am. Around the year 2000 I became very involved in Buddhism, so it became important for me to get that down. I wanted to incorporate Buddhism into a book organically, and not just as exotic trivia. I wanted it to engage the reader as literature.”

While he doesn’t consider himself a “gay author,” being gay is central to Shyam’s identity.
“When I came out I did have to deal with racism in Canada, and with the hierarchy of beauty in the gay bars,” Shyam says. “But there is always a hierarchy no matter where you are or where you go. When I came out [in the early 1980s] you could still discriminate against gay people. AIDS was a big issue, so we all developed strong survivor instincts.

“I also think in our early twenties that identity is important to you: ‘Who am I?’ You are released from your home, your family, the rigidness of your high school years,” says Shyam, who is now aged 48. “All of that has been cut from you. So as an intelligent young person you ask yourself the question. I admire that in young people. Those who don’t deal with this angst I think are dull people.

“But I never thought about my gay identity as such – I just lived it. I think how you identify first depends on which identity is under threat. Then that identity becomes primary. When it’s not under threat, then it takes its place in you.”