This story was originally published in Daily Xtra

Montreal author John Potvin was researching his new book about the homes of famous gay men around the same time he married his husband in December 2010, in the home of a close gay friend. It was here and then that Potvin’s vision for his book Bachelors of a Different Sort: Queer Aesthetics, Material Culture and the Modern Interior in Britain crystallized.

“I’d been thinking about this for half a decade, and what fascinated me about these gay male couples were their lives together,” Potvin says. “Much of what is written about gay life and queer identity is geared at the public sphere. I wanted people to understand how these men created lives within their homes.” 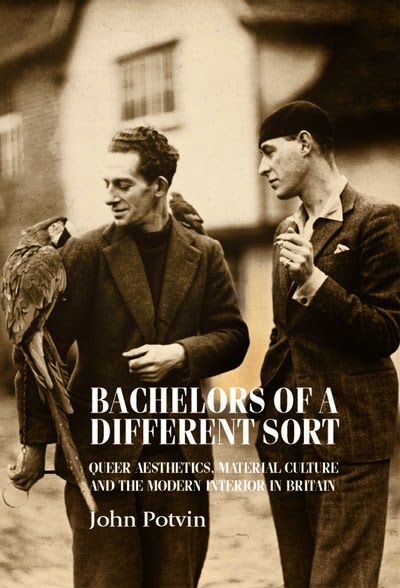 Bachelors of a Different Sort gives readers an inside look at turn-of-the century bachelorhood by offering case studies of the private lives and homes of several prominent gay bachelors living in Britain. All the bachelors chosen were in the creative arts — writers, actors, painters, designers and photographers — and the book includes the domestic interiors of Oscar Wilde, Noël Coward and Cecil Beaton.
Potvin, an art history professor at Montreal’s Concordia University, explores a largely unseen side of queer sexuality by showing how these bachelors used interior design to set themselves apart from the constraints of the hetero-patriarchy that surrounded them.

“Although [gay men] have been written out of the histories of design and the home, a profound sense of community was forged as a result of [them] living in these homes,” Potvin says.


Bachelors of a Different Sort begins with Britain’s Criminal Law Amendment Act from 1885, commonly known as the Labouchere Amendment, which made “gross indecency” — read: homosexuality — a crime punishable by imprisonment (look no further than the trial of Oscar Wilde) and covers the years up to 1957.

The book also explores what Potvin calls the “seven deadly sins” of the modern bachelor: queerness, idolatry, askesis (ie, severe self-discipline), decadence, the decorative, glamour and artifice. Potvin also examines the homes of such men as Wilde, Coward and Beaton to show how queer men created their own expressions of safety, comfort and productivity within their inner sanctums.

The chapter on Coward is especially effective. “Someone like Coward spent a lot of energy so that everything he chose — his clothes, his gestures — never pointed to his hidden sexuality, despite the fact that everybody knew,” Potvin says. “Ironically, Coward’s style became a template for jazz-age glamour and gay style.”

Potvin says there was also a lesbian aesthetic “with the explosion of same-sex female communities in London, Paris and Berlin. These women become much more involved in the modernist movement, which had a much more butch element to it. It’s there, but it doesn’t come into its own until the 1920s.”

Potvin will explore this lesbian aesthetic in a future book but first wants to explore how the cliché of gay men as designers and interior decorators began.

“I’ve applied for a grant to deal with that very question, so get back to me in a couple of years!” he says, smiling. “One important thing to remember about the men in Bachelors of a Different Sort is that they are not professional decorators. But gay males go into the trade because it becomes a safe milieu for them to work in, designing and decorating homes for — and the irony is inescapable — traditional nuclear families.”