Irish drag queen and “accidental activist” Miss Panti Bliss became a YouTube sensation in January 2014 when she walked on the stage at the Abbey Theatre in Dublin and gave a touching and memorable speech on homophobia.

“Have you ever been standing at a pedestrian crossing when a car drives by and in it are a bunch of lads, and they lean out the window and they shout “Fag!” and throw a milk carton at you?” Miss Panti asked the Abbey Theatre audience rhetorically. “Now it doesn’t really hurt. It’s just a wet carton and anyway they’re right – I am a fag. But it feels oppressive. 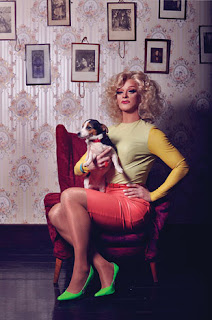 I can relate: I live in the McGill Ghetto in downtown Montreal and I can’t tell you how many times over the years folks in drive-by cars have screamed “Faggot!” at me at the corner of Parc Avenue and Milton.

The video of Panti's speech went viral — it has been seen more than 700,000 times on YouTube — and landed her a North American lecture tour.

Upon her return to Dublin, publishing house Hachette Books Ireland asked Panti (aka Rory O’Neill) to write her memoirs, Woman in the Making.

“The turnaround on the book was less than six months,” Panti says. “But saying I cashed in suggests I was given loads of money, and I wasn’t. It is part memoir, part rant. And I have two chapters about the aftermath of my lecture at the Abbey Theatre. It was an insane period in my life, exciting and exhilarating.”


Panti cross-promoted the book during her recent Canadian lecture tour (watch the video below of her Feb. 16 lecture at Montreal's Concordia University, “Gender Performed: A Conversation about Sex, Gender, Theatre and Politics”).

“The turnaround on the book was less than six months,” Panti says. “But saying I cashed in suggests I was given loads of money, and I wasn’t. It is part memoir, part rant. And I have two chapters about the aftermath of my lecture at the Abbey Theatre. It was an insane period in my life, exciting and exhilarating.”

“It’s a conversation about gender, a topic I’ve spent a lot of time thinking about over the years, whether it is socially constructed and something we just learned to perform. I’ve never been happy with the descriptions people generally use to describe what I do because I’ve never felt like I’m impersonating a female. That is something that is thrown at drag queens sometimes by a subsection of feminists: ‘Isn’t it like blackface?’”

O’Neill is having none of that.

“First of all, there’s a billion kinds of drag queens in the world with different motivations, and some of them might be horribly misogynist, so I can only speak for myself. When I’ve done drag, I’ve always rejected terms like ‘female impersonator’ because that’s not what I’m doing. As for drag queens being bitchy, they’re just being themselves! If I am parodying anything at all, it is the tools our society expects women to use to express their femininity. What I’m really doing is taking those tools — makeup, big hair and sequins — that our society decided women have to use and that men are not allowed to use.”

O’Neill agrees that some drag queens cross the line. “Part of the problem is the bar for entry to drag is set pretty low. Most people don’t see drag or much of it, and when they do, it’s usually in some trashy bar. Other queens are just out to have a good time and put little intellectual thought into what they’re doing. They just see it as a way to get a few free drinks. But how can you compare what a Taylor Mac does to your trashy drag queen in a club? There are so many different kinds of drag queens.”

Meanwhile, O’Neill is of two minds when it comes to using the word tranny. In 2013, on Joan Rivers’s internet TV series In Bed with Joan, RuPaul discussed being slammed by the trans community for using the word. “The trannies should know that a nigger said it to a kike. Here we go again. Calm down, for chrissakes! Everybody take a deep breath,” Rivers later told me in Daily Xtra.

“That issue is really complicated because it’s two different worlds colliding,” O’Neill says. “It’s interesting that a lot of the trans people who were okay with using the word were the ones who came into their trans identity a long time ago, pre-internet. A lot of trans people at that time came up through the drag-genderfuck scene, then emerged one day and said, ‘I’m a trans woman.’ In that world, the term tranny isn’t specific to trans people; it’s a catch-all word for all people who don’t fit into the gender binary. Other people outside that community have taken that word and turned it into an insult. The problem is, certainly in the world I run in, there are lots of people who identify as tranny, not as trans. They don’t believe they are a woman; they are something else, and they call themselves ‘tranny.’

“When I am at a party and my friends don’t know that a person identifies as trans or as a transvestite or drag queen, they’ll say, ‘Oh, there are trannies in the corner.’ If I am hanging out with my genderfuck friends, they’ll get annoyed if I don’t use the word tranny. That said, I would never call anybody a tranny in public. I don’t want to upset or hurt anybody.”

Panti also lived in Tokyo for four years in the early 1990s. “I was doing more art-school drag at the time, and going to Japan offered an opportunity to change that. I was in a double-act with an American queen from Atlanta, Georgia, and our shtick was we were foreign drag queens. We did the club circuit, but we also ended up in pop videos and fashion shoots. At that time Cyndi Lauper was touring her 1994 greatest hits album Twelve Deadly Cyns...and Then Some which included a reworked version of Girls Just Want to Have Fun with a reggae vibe, and in the U.S. video for that there were a bunch of drag queens. As you can imagine, Cyndi Lauper is extremely popular in Japan, and she wanted drag queens on stage with her when she performed on this Japanese TV show. So they found us. After the TV show she hired us to perform on her tour of Japan.”

I couldn’t let Panti go without asking her if men around the world are now throwing themselves at her feet. “God I wish!” Panti replied. “God, no! Drag, as I am sure you are well aware, isn’t great for someone’s sex life. Sometimes I think (my notoriety) has made Panti even more intimidating, But if I must I can always turn to the tranny chasers… Are we allowed to say tranny chasers anymore?”