WANDA SYKES ON HER UNIQUE VOICE, LGBT LIBERATION AND HER WHITE FAMILY

Three Dollar Bill: I’ve interviewed some very unique sounding voices over the years – James Brown, Cher, Joan Rivers and Bill Cosby. It is surreal to listen to your voice now. Have you always known you have a special voice? Do you deliberately try to use this to your advantage onstage?

Wanda Sykes:  I don’t deliberately try to use it in my stage act. I didn’t know I had a unique voice (for many years), but I did know it (sounded) different when I was a kid. My mother wanted me to change my voice. She’d say, ‘You have to do something about your voice! It doesn’t sound pretty! Listen to all the other kids, they sound nice, and then there’s you!’ I had no idea how I could change my voice. So I was always worried I had an ugly voice. I was an adult before I found out people liked my voice when I did stand-up or animated roles. I’m glad I never had any work done on my vocal chords. It’s kind of paying off for me. People love my voice and that’s cool. 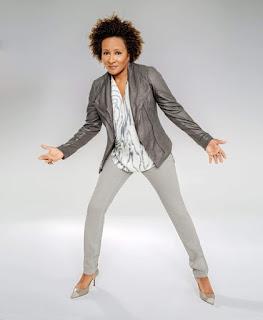 My parents are a mixed-race couple. Your wife and children are white. What is like for you to witness the struggle from the inside?

I feel like a minority in my own home now. I talk about it a lot in my act, it’s just odd because I’m this strong black woman with historically black roots and all, I went to a historically black college and now I have a white wife and two white kids. I realize when I look around, I wonder, ‘How did all these white people end up in my house? What the hell did I do!’ Then again, my kids are so colour blind, you realize that’s how we’re supposed to be. When they are born, kids look at people as people. They don’t categorize like we do. I’m trying not to put my crap on them. It’s kind of hard because I see shit (in the world). But I am learning a lot (from my kids).

One of my favourite stories is the time writer James Baldwin was being interviewed by David Frost on TV. Frost Told Baldwin, ‘You were black, homosexual and poor. Didn’t you think you had everything going against you?’ And Baldwin replied, ‘To the contrary, I thought I’d hit the jackpot.’ Has Wanda Sykes hit the jackpot?
Hit the jackpot? Well, it depends on what the jackpot is. If I’m playing the nickel slots, I’d say yeah. But if we’re talking power ball, I have not hit the jackpot.
How awesome was Gay Pride week in June - the same week the Stonewall Inn was declared a historic monument, when the Supreme Court legalized same-sex marriage across America, and the White House was lit up in the Rainbow colours. What was that week like for you?
I was out in L.A. when it all went down and we all went to West Hollywood and it was a big street party! It really felt like the doors had opened up for us: ‘Hey, we’re part of this thing too.’ It really was all those words – awesome, emotional and overwhelming.
What was it like to host the U.S. National LGBT 50th Anniversary Celebration at Independence Hall in Philadelphia on July 4?
There were a few moments when I teared up a little bit. I didn’t realize I would get touched like that. Here it is, it’s the fourth of July, and in the back of my mind as I was getting dressed, I thought, ‘I should be putting on a pair of shorts, I should be a little drunk by now. In a couple hours I should have barbeque stains on my shirt!’ But instead there I was all dressed up in front of thousands of people, being dignified. But I was so happy I did it. When they did the reenactment of the (LGBT activists) marching (outside Independence Hall in 1965, in what was then the largest demonstration for gay equality in world history), it was really moving and I was very happy to be there
twitter.com/bugsburnett
Posted by Three Dollar Bill at 21:03