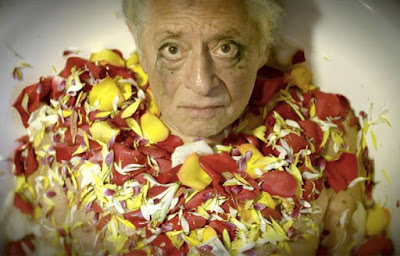 There’s nothing quite like making a grand entrance. Just ask Montreal theatre legend Louis Negin, the first actor to ever appear nude on a legitimate British stage, in John Herbert’s Fortune and Men’s Eyes in London’s West End back in 1967.

But if London audiences gasped when Harry Potter star Daniel Radcliffe appeared nude in the West End revival of Equus in 2007, imagine the reaction to Negin 40 years earlier!

“In London at that time if you went to see a play with nudity in it, you had to join a (theatre) club which couldn’t be closed down (by the police),” Negin explains. “When Lord Chamberlain dissolved that law, Herbert’s Fortune and Men’s Eyes – with its explicit scenes of gay rape in prison – was a huge success with audiences in Canada and the West End.”

Ironically, it wasn’t Negin being buck naked on stage that made him the toast of the theatre world, but rather an incident on opening night that made sensational newspaper headlines worldwide.


“My mom came opening night and I didn’t tell her about the nudity,” Louis remembers. “The play was about boys in jail who chased me out of the shower, towel-whipped me and pulled off my towel. So there I am in the nude in the West End and my mom stands up (in the audience) and in a strong cockney accent says, ‘Louis, put your pants back on!’”


Louis laughs today but, he adds, “I thought I would faint on the spot. And it ran in every newspaper around the world. My mom did interviews and there were paparazzi camped outside the house!”

If there’s anybody who knows a thing or two about making an entrance, it’s Louis Negin.

Take the time Joan Collins arrived at his birthday party in Toronto, when Collins was starring in the play Legends! at the Royal Alexandra Theatre in the fall of 2006.

“Joan’s an old, old friend and she was in Toronto with her husband – he’s very nice and very young, he’s like 12 years old,” Negin says. “But I didn’t tell anyone at the party that she was coming because if she doesn’t come, then everybody’s disappointed. But there were lots of people there she knew and, of course, the doors open, every head turns and she’s Joan Collins.”

Or how about the time Negin met Marilyn Monroe.

“It was at this Howard Johnson’s in Massachusetts. She came in wearing a babushka and no make-up on. She goes into the washroom and 45 minutes later out comes the image. We all talked and I felt like I wanted to protect her. She was very vulnerable. She was really like that. It wasn’t an act.”

“A friend of mine was stage-managing her show [in Ottawa] and we were invited to a matinée. So I’m at her hotel in the magazine store and I hear this deep throaty laugh. I look over and it’s this really old lady. ‘Oh my God, it’s Dietrich!’ Then when we saw her on stage she had completely transformed. She was beautiful!”

The London-born Negin arrived in Montreal during its Sin-City heyday. “It was like being in a Hollywood movie – all these nightclubs were filled with gangsters and movie stars. It was like Las Vegas!”

While homosexuality was still a crime in Canada back then, Negin was always out. After all, he worked in the theatre world. Still, that same world was unable to protect his colleague, acting legend John Gielgud, who was arrested in England for cottaging in 1953.

“John and I worked together in Much Ado About Nothing at Stratford and during that time I got to know him,” Negin recalls. “At the time of his arrest he was starring in a play in London. He was petrified to go on the next night. How was the audience going to react? It could mean the end of his career. So when he went on it was an act of bravery. And the audience cheered him.”

Some of Negin’s other co-stars over the years include Anthony Quayle, with whom Louis worked on Broadway, and Dame Edna (a.k.a. Barry Humphries). “Barry’s a very funny man but when he’s dressed as Dame Edna, you must always address him as Edna. He stays in character because it’s very difficult to keep switching back and forth.”

Negin also appeared on stage as writer Truman Capote in another one-man show, Tru, as well in the film 54. In fact, Negin met Capote (“He was with Warhol”) in 1970s New York where Negin also found himself getting down at Studio 54.

These are the kind of anecdotes that filled The Glass Eye, Negin’s critically-hailed one-man show he wrote with his old friend, Quebec playwright and Robert Lepage-protégé Marie Brassard.

Today, Negin blames rabid celebrity journalism for cheapening our movie stars. “They all look the same. Lindsay Lohan? She’s no Marlene Dietrich. The only one today who has that old glamour is Cate Blanchett.”

As for Negin, he continues to act and make movies, notably with famed director Guy Maddin. For his role in Maddin’s 2011 film Keyhole – which stars Jason Patric, Isabella Rossellini and Udo Kier – Louis stripped buck naked one more time.

“I think all actors are exhibitionist, to be honest,” says Louis. “Everybody does the same number: ‘Oh, I have to think about it.’ But really they’re overjoyed! The thing that would kill you is if someone snickered or laughed [at your body]. Then I think I would just die a million deaths. But it doesn’t happen.”

On the Winnipeg set of Keyhole, Rossellini told Negin, “We don’t even notice that you’re in the nude!” But when filming on Keyhole wrapped up, the director of photography told the cast and crew, “Thank you for giving your all!”

Louis laughs. “Everybody was screaming and laughing and there was a big round of applause. But until then I just didn’t think about it.”

Canadian theatre legend Louis Negin was the first actor to ever appear nude on a legitimate British stage, in John Herbert’s Fortune and Men’s Eyes in London’s West End back in 1967. “In London at that time if you went to see a play with nudity in it, you had to join a theatre club which couldn’t be closed down by the police,” Negin recalls. “When Lord Chamberlain dissolved that law, Herbert’s Fortune and Men’s Eyes – with its explicit scenes of gay rape in prison – was a huge success in the West End.”

But it was an incident on opening night made sensational headlines worldwide: “There I am in the nude onstage and my mom stands up in the audience and says, ‘Louis, put your pants back on!’ I thought I would faint on the spot. The story ran in newspapers around the world. My mom did interviews and there were paparazzi camped outside the house!”

London-born Negin – who first moved to Montreal during its Sin-City heyday – has also performed on Broadway; met or worked with almost every glamourous star of the 20th century, from Marlene Dietrich and Marilyn Monroe to Joan Collins and Isabella Rossellini; and co-stars (along with Roy Dupuis, Geraldine Chaplin, Marie Brassard, Udo Kier and Charlotte Rampling) in director Guy Maddin’s new movie The Forbidden Room, closing film of the 44th edition of Montreal’s famed Festival du nouveau cinema.

What is your favourite pastime?

I have spent three-quarters of my life in cafés drinking cappuccino!

How long have you been a Montrealer?

Though I once lived in Toronto for 40 years, I always kept a tiny pied-a-terre in Montréal, at Carré St-Louis. Every time I felt the pressure was too much, I would run away back to Montréal and be very happy, go to a good restaurant, make love, drink wine. I’ve always had great affection for Montréal ever since I first came here when I was very young and dreaming of Hollywood. I arrived in Montreal and, my god, I was suddenly in nightclubs with showgirls, going out with gangsters, and I must have been about 15 years old!

What is the coolest thing you’ve done so far this year?

I filmed two music videos, which I had never done before in my life. One was for Montreal-based artist and musician Daniel Isaiah for his single Heaven Is on Fire which also starred Marie Brassard.

What is it you love most about acting?

I love that you are allowed to use your emotions.

What is it like being the muse of Guy Maddin?

It’s having a director that you love, and hope he loves you. You go through times when you think, ‘Oh, I’ll never work again. The phone isn’t ringing, they hate me, nobody wants me, go back to hairdressing!’ Sometime in life you will meet one person – a director or producer– who is on your wavelength. (Guy) says one word and I know exactly what he means and I know where to go with it.

Who is the most glamourous actress you have ever met or worked with?

I’ve worked with a lot of very famous stars, and I think one woman who had the glamour of another time was English actress Margaret Leighton.  At the time we were doing the play Much Ado About Nothing on Broadway (in 1959) with John Gielgud. I was cast because I had good legs and looked good in pink tights! Maggie always had 1920s-style make-up and hair and looked impeccable at all times. She was so together, beautiful and charming. Maggie always was a lady, just perfect.

What is your favourite Montréal memory?

It was my introduction to all the nightclubs. It was like being in a Jimmy Cagney movie, then suddenly it was all for real.

I’ve gone through a million restaurants, but my favourite is L’Express on Rue St-Denis because it is very sophisticated, where you can feel like a movie star. It’s what you expect a French bistro to be. The place has memories. I also really enjoy Le Filet on Rue Mont-Royal, which is a place to go if you want to have fun. It’s noisy, glamourous, a great place to bring guests from out of town.

Where do you like to go for drinks with friends?

I go a lot to the Arts Café on Rue Fairmount. They get a lot of well-known people, like Xavier Dolan, many great French-Canadian actors, lots of artists, writers and film people. It could be the Left Bank in Paris! I miss that a lot when I’m not here. Toronto may have great big $10-million restaurants, but it just doesn’t have that kind of ambiance.

What is the next big thing you’re planning?

I did a play with Marie Brassard (2008’s critically-acclaimed The Glass Eye) which was about (my) growing up in Montreal. Now I want to write the second half of it. I’ve started writing it, but it’s weird going back in your life and sorting through all the memories because you remember very strange things!