CLINTON FOR PRESIDENT! STAND-UP LEGEND KATE CLINTON ON THE STATE OF THE UNION 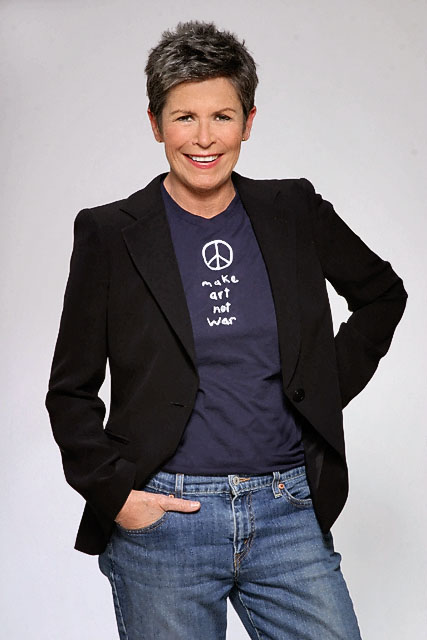 (May 21) "I think Charlie Sheen is representative of all straight men right now!" legendary stand-up comic Kate Clinton told me just days before Ashton Kutcher announced he is replacing Sheen on the CBS sitcom Two and a Half Men.

"I love to generalize!" The great Kate Clinton is laughing her head off.

"But seriously, straight men need to reel him in!" she says. "It’s not making you look good! I think straight men are in trouble and Charlie Sheen is doing them no service at all. They need to do an intervention! ‘Charlie, you’re making us look bad!’"

This year Clinton celebrates her trailblazing three-decade stand-up career – which specializes in political commentary – with her year-long Glee Party Tour! She also releases Lady HAHA, her tenth DVD collection, next month, and she happily agreed to sit down for my ninth annual Kate Clinton column.

"Almost 15 years," I reply, recalling the Q&A with Clinton I hosted at Montreal’s downtown Chapters bookstore during her summer 1998 book tour for her first collection of essays titled Don’t Get Me Started. I was young and nervous and Kate – a personal hero of mine – put me at my ease and made me feel like a million bucks.

The former elementary school English teacher – with her always-reassuring voice – did stand-up for the first time in 1981 on a dare, and she has since headlined nightclubs and festivals around the world, and always proudly as an out woman.

Without Kate Clinton, there is no Rachel Maddow on MSNBC, no Rosie O’Donnell (whom Clinton also used to write for on her old TV show), no out Lily Tomlin. As Kate herself once said, "Lesbian humour isn’t trying to sell anything, it doesn’t have to sell out. Coming out as a lesbian on stage is still a very political act – if it weren’t, more women would do it."

Kate’s also had several off-Broadway runs and was a regular at Montreal’s Just For Laughs Festival until JFL pulled the plug on their Queer Comics showcase in 2005, a move that hasn’t hurt all those closeted gay comics JFL loves to hire.

Moreover, in her 30-year career Clinton has helped raise millions of dollars for such organizations as the New York City LGBT Community Center, the Gill Foundation and the U.S. National Center for Lesbian Rights. In fact, working the stage at community events year-round, Clinton has inspired yet another new generation of supposedly "post-gay" activists who have finally forced Obama’s hand over gays in the military and same-sex marriage.

"They walk the walk about coalition building, they’re very gender fluid, they work in the social media but they also know you still have to go door-to-door with flyers," Kate says proudly. "Every time I go it recommits me."

While a Sarah Palin 2012 presidential ticket could very well seal a second Obama term, Clinton (not related to Bill or Hillary), says, "I don’t want to get lazy again like I did with George W. Bush. Actually, I was quite bored: ‘Yup, he’s evil!’

"Palin would be a comedy gift for me, but bad for ‘us.’ I think she’s a tool, has no clue what’s involved and that’s probably what they [the backroom Tea Party boys] want, another little puppet. I think she’s very dangerous. I [also] think the old-school Republicans are terrified."

As for anti-gay Republicans Newt Gingrich and Donald Trump making noises about running for president in 2012, Clinton says, "I think the grandiosity of Trump was why he said he was running. And Newt sees himself as an idea man and represents the old guard. I think they’re both a direct reaction to the Tea-baggers. Obama could be going, ‘Yeah, destroy each other!’ but he’s [too busy] running the country."

Kate also does not believe Hillary Clinton will run for office again. "I saw her [recently] and [my partner, author and activist] Urvashi [Vaid] was talking to her about immigration and international things and I said to [Hillary], "And I’m worried about your jet lag!’ And she replied, ‘Tell me about it!’ I said, ‘I don’t know how you do it. When I get off a plane I’m barely coherent. You get off a plane you have to do a press conference!’ Hillary said, ‘I know!’ I think she’s really tired."

"I actually take a bow when I do it because I enjoy it so much!" Kate laughs. "When I first wrote it I looked heavenward and said, ‘Thank you!’"

Does our Kate have trouble living up to being a living legend? "Do you feel obliged to do something legendary every time you step outside?" I ask her.

Kate laughs, then tells me, "It’s a burden, yes! I need to be able to do that pose in yoga for the people! Actually, I don’t really. I feel like I’m a spokesperson and I know where I come from. I come from the women’s movement, the [black] civil rights movement, the sexual liberation movement, the gay movement. While I never pulled off being straight very well – I felt like a fraud – I do this job very well."