TWO GAY GUYS, A FABULOUS SALMON AND A GALLON OF VODKA! (AND JOAN RIVERS!) 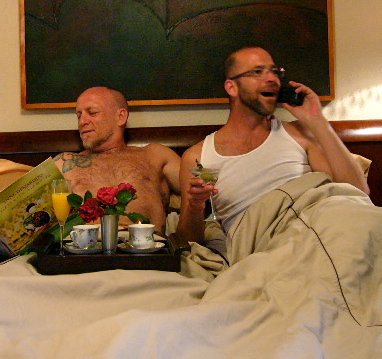 (May 19) Joan Rivers once spent 15 minutes giving me plastic surgery advice for my mother. "You know, Richard," Ms. Rivers told me afterwards, "Why don't I just talk to your mother instead? Why don't you guys come backstage to see me when I'm in Montreal!" In the end Mom decided not to get an eye tuck, after Ms. Rivers told her, "My God, you look too young to be Richard's mother!"

Then some days ago, Rivers made headlines around the world (it was a slow news day, granted) when she "revealed" an old showbiz trick: Spraying on homemade deodorant made with vodka, which kills smelly bacteria. “I always spray my costumes with vodka and water," Ms. Rivers said. "It’s an old Broadway trick — two-thirds water and one-third vodka, spray your armpits and you’ll never smell again.”

So I told my old friend and vodka boozing partner Louis-Michel "Babs" Taillefer — half of the delicious Two Gay Guys video-chef cooking team — that we'd have to try this out the next time I visit his Queen City home with a gallon of vodka. Replied Babs, "Well lets not be foolish now, honey. Just a little dab will take care of those unGodly odors, but the rest has GOT to go down our gullets for good measure!"

Anyway, Louis-Michel and his life partner, award-winning restaurateur and all-around hot chef Derooy Buck — also known as “Chef Buck” and “Sidedish Louis-Michel” — are the instigators behind the very entertaining and often hilarious The Two Gay Guys YouTube cooking channel (think Two Fat Broads, but with hot — and much slimmer — Leather Daddies instead). The cooking segments showcase Chef Buck’s culinary talents and Louis-Michel’s fierce appetite, promising easy recipes and cooking techniques while using a dash of humour (and a great cha-cha-cha soundtrack) to help heat things up in the kitchen. Their latest episode was posted this week and is called Two Gay Guys and a Fabulous Salmon!, which you can watch below.

“If you want to be successful in your own kitchen, you must always be curious and willing to explore new flavours,” says Buck. On the other hand, Louis-Michel is far from being a Julia Child-in-the-making. He admits he can’t cook to save his life: “I’ve actually burnt eggs while trying to hard-boil them!”

But damn, Babs can sure drink vodka! Cheers, darling!
Posted by Three Dollar Bill at 10:51