'GARDENIA IS A FUCKING MASTERPIECE" 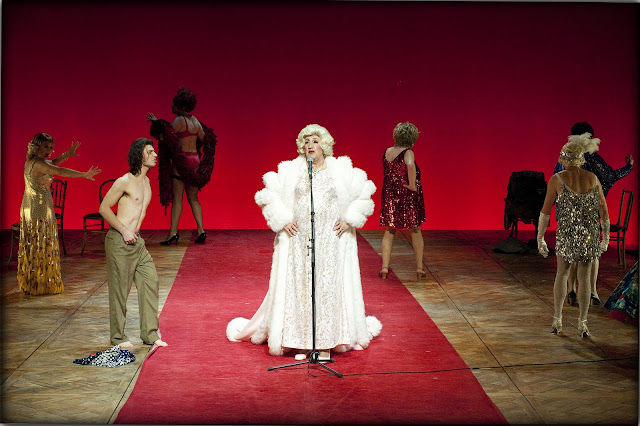 (June 4) After blowing away audiences and critics across Europe, the Belgian stage sensation Gardenia made it's much-anticipated North American debut at Montreal’s Festival TransAmériques on June 1, has become the hit of the festival and taken the city by storm.

Theatre critic Pat Donnelly wrote in the Montreal daily The Gazette, "The pace is glacial, the progression symphonic. The quasi-classical soundtrack, by Steven Prengels, is brilliant... Because of its insistence on gravitas and careful measuring of gesture, Gardenia mesmerizes for most of its one hour, 45-minute duration."

Aline Apostolska of La Presse wrote, "The audience is overwhelmed because this true story delivered without compromise by authentic [drag] artists is also about us all, about the fragility of humankind."

"There’s just no other way to describe it," I wrote in my review for The Charlebois Post. "Gardenia is a fucking masterpiece."

“All kinds of people everywhere have fallen head over heels for Gardenia, even fashion designer Jean-Paul Gaultier, who was so crazy about the performers that he came to see them three or four times,” director Alain Platel told me for a story in Toronto's Xtra newspaper. “He even made special gifts for each of the performers.” 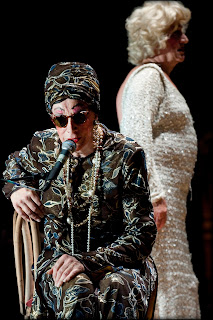 In an essay on the evolution of drag on the stage that I wrote for French Canada's FUGUES magazine, I point out that Gardenia is no Walt Disney-esque Priscilla Queen of the Desert: The Musical, which I saw at Toronto’s Princess of Wales Theatre before it moved on to Broadway. "Priscilla is currently getting rave reviews [in NYC but] as a gay man who enjoys drag, I felt curiously neutered [by the musical]," I wrote. "Which is why Gardenia – while melancholic – is such a breath of fresh air."

In my review for The Charlebois Post, I write, "The play finishes with the entire cast of aging queens performing one genuine showstopper in a chorus line of sorts, singing along with Judy Garland to a live recording of Somewhere Over the Rainbow. Those last minutes when they sing, “Somewhere over the rainbow / Skies are blue / And the dreams that you dare to dream / Really do come true” - knowing what they all had to endure in their own youth - were absolutely riveting. Here they were on a stage thousands of miles away from home where at their advanced ages they thought they had no right to be. It was so poignant and beautiful I cried. There’s just no other way to describe it: Gardenia is a fucking masterpiece."

If you have not yet seen Gardenia, do not miss their final performance in Montreal tonight, on June 4, at the Monument National.


Gardenia at the Festival TransAmériques
Posted by Three Dollar Bill at 17:02