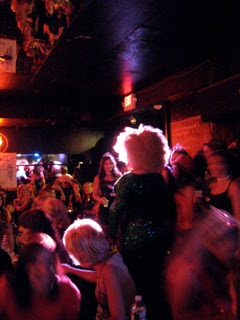 (June 6) "Look at all the vagina here tonight!" big, blonde and buxom hostess Kris Kneivel said from the sparkling stage of Jacque’s Cabaret, a fabulously trashy drag bar in the heart of Boston’s downtown district.

On this night the seedy gay nightclub is packed wall-to-wall with all kinds of straight women – young and old, white and black – celebrating the raucous hen nights of their best girlfriends. And I’m here with my old buddy Seb because we were simply looking for a fun night out in a city that’s better known for its sports teams and museums than it is for its loudmouth drag queens.

"We get a lot of hen night parties!" Jacque’s manager Kristin Turillo explained to me as she stood behind the bar slinging drinks (and poured me another double-vodka soda). "This place can get real crazy!"

So – in my best strip-bar imitation – I stuck a whole lotta dollars in the cleavage of Jacque’s finest drag divas, like the big, black and beautiful Mizery, Destiny (the Asian Beyoncé) and Katia, who looks like a dishevelled, dizzy Lady Gaga.

I don’t think this is quite what one of Boston’s leading citizens, the late William Tudor – co-founder of the 195-year-old North American Review (New England’s pre-eminent magazine until The Atlantic came along) – meant when in 1819 he dubbed Boston "The Athens of America."

But Tudor would have approved of the amazing John F. Kennedy Presidential Library and Museum, a gorgeous building designed by I.M. Pei, the famous master of modernist architecture who also designed Montreal’s Place Ville Marie in 1962. You’ll discover everything – from documents to gifts and treasures given to JFK by foreign leaders and dignitaries – at this museum.

But while Kennedy is one of the most studied and written-about presidents of the 20th century, few knew that his best friend of 30 years – Lem Billings – was a gay man until my esteemed colleague Charles Kaiser revealed the truth in his critically hailed 1997 New York Times bestseller The Gay Metropolis: 1940-1996 (now a Grove Press softcover).

I explored much of Boston on foot when I visited the city recently, but a couple of my personal highlights were visiting the Paul Revere House on the Freedom Trail that snakes through Boston, and a Saturday night dinner at one of the finest Italian restaurants I’ve ever dined at, the trendsetting BiNA Osteria (581 Washington Street).

And when it comes to hot tickets, there is also more to this city than the NHL's Boston Bruins who are playing the Vancouver Canucks in the Stanley Cup finals this week. Like Bean Town's pretty good theatre scene. Seb and I ducked into the Charles Playhouse (on Warrenton Street, just a couple blocks away from Jacque’s Cabaret) to see the very gay murder mystery Shear Madness, the longest running non-musical play in the history of American theatre.

There is crowd Q&A participation with the homicide cops on stage in this two-hour play, so the audience decides who the murderer is. Meaning the ending can change every night of the week. If you’ve never seen it, don’t miss it.

On our drive home, Seb and I skipped the gay resort Provincetown but stopped for breakfast in Salem, Massachusetts, then checked out the Salem Witch Museum. Very creepy. Also, while in Salem, check out the small town’s famed Peabody Essex Museum which is currently hosting the blockbuster exhibition Golden Evenings: Dutch and Flemish Masterworks from the Rose-Marie and Eijk van Otterloo Collection, which closes on June 19.

Boston's Gay Pride Parade and Festival is on June 11