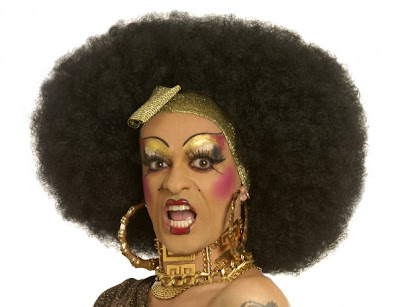 (June 17) Few drag queens on Earth are in the same league as Montreal’s famed (and infamous) Mado La Motte, so-called because patrons at Poodles’ nightclub on The Main in Montreal in 1987 thought she was so ugly they dubbed her “The Mutt.” Thus, Mado ‘La Motte’ was born.

When that other great drag queen, Lady Bunny of New York (she co-founded Wigstock), attended the bastard child of Wigstock, Mascara (which Mado founded 14 years ago and which has since become the biggest drag show on the planet at Montreal’s Divers/Cite Festival), she told Mado backstage, “What a fabulous show, darling!"

Mado – a.k.a. Luc Provost – the marketing genius got her start as a shooter bitch and cigarette girl at Poodles and Club Lézard, but has (like me, bless her) written a column for the monthly gay glossy Fugues magazine for over 20 years, appeared on countless TV programs and morning shows and was colour commentator for live French TV coverage of Divers/Cité’s original Pride parade for several years; was a spokesmodel for a major potato chip company, sold out the much-lamented Spectrum five times ("It was sad to see that venue close"); and nine years ago opened her own nightclub, the phenomenally successful Cabaret Mado in Montreal’s Gay Village, where her statue doubles nicely as the nightclub’s marquee and is something of a beacon in a neighbourhood now hailed as one of the planet’s great gay meccas.

Then 11 years ago she began – scooch over RuPaul – the world’s first-ever Drag Race, hands-down the single most popular event at Montreal’s Fringe Festival.

So this bitch sat down with this city’s other bitch for the Drag Race low-down this weekend.

Are you excited about this year’s June 18 drag race?
Of course I’m excited! I’m excited every year because drag queens are the best runners in the city! And we prove to the world that [being] ridiculous never killed anyone!

Would our world be best off worshipping our drag queens?
Of course! Drag queens are the new religion! Praise drag!

Your career began on The Main and, 25 years later at the Fringe, it’s like you’ve come full circle!
La Main was the craziest street in town 25 years ago. This was where everything was happening, where every youth current was born, where the underground was located. You could find everything there. It’s not like that anymore. I don’t know if I bring anything back [here]. All I know after all these years is being normal is not good –  no way, honey! Don’t be a follower, don’t follow shit. Being different is superior.

You starred in the fabulously trashy play Saving Céline at the Mainline Theatre back in 2007. Have you got another play in the works?
I got the taste to do more theatre but then drag is also the biggest form of theatre. Personally, I’d like to do another really big Mado show at the Just For Laughs festival for my 30th anniversary [in 2017]. But I’d also like a real play about the creation and evolution of Mado. Unless someone offers me a bigger role!