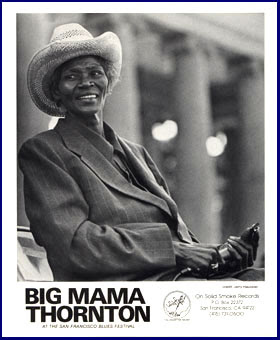 In 1983 my father took me to my first B.B. King concert, and halfway through his set at Montreal’s Place des Arts, Mr. King invited butch blues legend Willie Mae “Big Mama” Thornton on stage to belt out a song.

The hard-drinking Thornton – who would die seven months later, on July 25, 1984, at the age of 58 – was a regular headliner at Doudou Boicel’s Rising Sun Celebrity Jazz Club across the street. “Big Mama drank her gin with milk,” Boicel recalls.

When a frail Big Mama grabbed the mic at Place des Arts, she just about blew Mr. King off the stage.

Halberstam’s fascinating lecture Queer Covers: Big Mama Thornton, Lesbians On Ecstasy, and the Recycling of Political Culture pinpoints how Thornton's song Hound Dog (credited to songwriters Leiber and Stoller) and Thornton’s masculine stage presence was ripped off by Elvis Presley, in the process redefining cool and literally morphing Elvis into the King of Rock’n’Roll.

“He takes the shout from Thornton, the defiance, the confident rejection of the ‘high-class poseur,’” Halberstam states.

Meanwhile, Montreal’s Godfather of the Blues, Stephen Barry, who has played with practically every blues and rock’n’roll legend in showbiz when his was the house band at the Rising Sun, backed up Thornton for three years. “For my money she wasn’t lesbian because I remember these French girls would come up and try to kiss her and she’d get her elbow up,” he told me. “She wasn’t androgynous – she was like a shaman. She had a wonderful singing voice, a depth of feeling. It was the closest thing I ever had to a religious experience.”

But Halberstam says, “Thornton, in her mode of dress, her affect, her phrasing and her bluesy performance, can easily be categorized as queer, and her effect upon Elvis, his masculinity, his way of dancing, his singing, has yet to be [properly] assessed.”

Halberstam tells me, “Big Mama Thornton is one of the unsung heroes of both rock and blues. She exemplified how people deal with masculinity in female performers: The term 'Big Mama' was used to domesticate Thornton and turn her masculinity into something female again.”

(Former LOE drummer/percussionist Jackie Gallant also happened to be my schoolmate at MacDonald Cartier Memorial High School years ago. But I digress.)

“In my lecture I discuss how lesbians are always cast as derivative,” Halberstam explains. “Big Mama was a writer of Hound Dog that made Elvis famous but never got money for it [except for a one-time payment of $500]. The idea that lesbians can’t be original comes up in LOE, who make an art of making covers of other women musicians.” 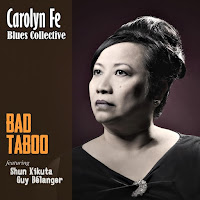 Meanwhile, over at the now-closed legendary Rising Sun, Thornton headlined many gigs until her final days. She remained bitter to the end about how she and Johnny Otis were never properly credited for Hound Dog.

“I’ve been singing before Elvis was even born,” Thornton once famously quipped. “He makes a million and all this jive because his face is different from mine.”

Before Thornton passed away on July 25, 1984, my friend and blues singer Carolyn Fe auditioned to be a dancer at Boicel’s then relocated Rising Sun nightclub in the old famed Rockhead’s Paradise nightclub in Little Burgundy (you can still see what Rockhead’s interiors looked in Louis Malle’s 1980 Oscar-nominated film Atlantic City starring Burt Lancaster and Susan Sarandon).


The Rising Sun lasted just 18 months at that location before moving back to Ste-Catherine St. in July 1982, and where it remained for the next eight years before club was destroyed by fire in March 1990 (it again reopened on St-Laurent Blvd., but closed for good in 1991).

It was here that Fe met Thornton.

“Doudou called me to audition because he wanted to start an old-style revue but when I arrived he was busy, so I hung out at the bar while this skinny older woman in a straw hat sat onstage singing One Bourbon, One Scotch, One Beer. And I thought, ‘This voice is familiar!’  After the audition, Thornton finished her set and hung out at the bar. I paid my respects but she told me, ‘Honey, you ain’t got nuthin’! You don’t know!’ She was really bitter about what had happened to her. She said a bunch of expletives about how blues people ‘don’t get it.  But if a few people do, then I can go to my grave with a smile on my face.’”

Years later when I told B.B. King that his 1983 Montreal concert at Place des Arts with Big Mama was my first blues concert, I also asked him about Elvis and their days working for Sam Phillips at Sun Records in Memphis. 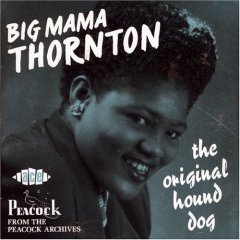 “I liked Elvis because he called me ‘Sir,’” Mr. King replied.

That kind of respect eluded Thornton in life, though when Janis Joplin first heard Big Mama sing what would become Joplin’s signature song, Ball and Chain, Joplin went backstage to ask permission to sing it.

A decade later, in 1977, on the Sassy Mama album (Montreal-based Just a Memory Records), you can hear Big Mama sing Ball and Chain in a live set recorded at the Rising Sun. You can hear her tell her band to do the song “B.B. King-style,” then hear her a minute later chastise her guitarist Phil Guy (the late brother of Buddy Guy) for soloing too long.

Thornton may not have gotten her due in life, but no one messed with Big Mama on stage.