I absolutely adore Dick. Heck, life just wouldn’t be the same without Richards. Fabulous Dicks like Burton, Gere, Branson and the Queen of Rock’n'Roll, Richard Wayne Penniman (a.k.a. Little Richard).

In fact, I love Dick so much I once flew to B.C. just to have a drink at Vancouver’s fabulous live music emporium Richard’s on Richard Street.

"Where did he go?" Dad asked Mom incredulously. (My folks, by the by, named me after that other fabulous homosexual, Richard the Lionheart.) 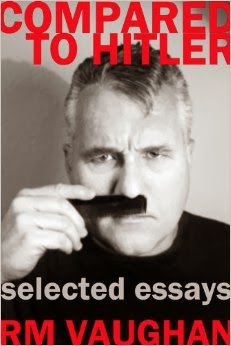 Another night, dressed in drag at Montreal’s Jello Bar (I looked absolutely stunning in my brand new blond Beyoncé ‘fro), three men stood before me arms crossed as I exited the men’s room.

"No!" I snapped, hands on my hips (thumbs forward, of course). "I’m Richard Burnett!"

Suitably chastened, they stepped aside as I sashayed past.

The best nightclub story of all, though, was told to me this week by yet another fabulous Richard, acclaimed author and Globe and Mail columnist (for now, though, until his bosses read this anecdote) RM Vaughan, who found himself in a, uh, novel position in France a few years ago.

"I went to this bar in Paris – a sex club bar, and I had a few too many and I realized at one point I was on the bar on all fours getting it from both ends," Richard shares. "I thought I came to Paris to have an Edith Piaf experience. Instead, I had a Jean Genet experience."

Apparently I’m not the only one who worships dick.

As Wikipedia describes Vaughan, "He is openly gay."

Oh yeah: Vaughan is also one of this country’s finest and most prolific writers. He’s a novelist, poet, playwright and filmmaker. He’s off to see the German translation of his play The Monster Trilogy in Vienna this autumn, then becomes writer-in-residence at some artist compound in Reykjavik, Iceland, in October.
Still, he’s no millionaire and, if he had to do it again, he’d stay in the closet until he crossed over to a wider audience.

That’s the very advice he recently gave a roomful of aspiring writers.

Vaughan knows of what he speaks.

Now Vaughan’s on a roll.

"Whatever integrity I had I’ve blown writing a celebrity column for the Globe," he continues. "It ain’t art. When I started the column – and before that I was an art critic – it was refreshing because it wasn’t about art. These folks are all about the money."

Truth be told, so are most artists. This past February, when I hung out with Andy Warhol muse, the Factory’s first superstar, literary legend and William S. Burroughs’ best friend, NYC poet John Giorno, I asked him, "Why wasn’t Warhol more openly gay in his work?"

"Because being gay was the kiss of death, like it still is today, sort of," John replied. "Gay people were not considered fully human. We know that [artists] Jackson Pollock, Willem de Kooning, Robert Motherwell and the others thought it was not possible for gay men to be as good as themselves. Warhol didn’t want the liability of being a fag attached to his work. It’s all about economic values."

Giorno is one helluva poet.

And so is Vaughan.

Just read his new poetic memoir Troubled (Coach House Books) about his clandestine sexual misadventure with his therapist. It ended badly, with lawyers and the suspension of the doctor’s licence. "I went to university, I write for a living, I’m kind of smart. How did I do something so stupid?" Richard, now 43, asks.

Then we’re back to our favourite topic: Dick.

Did Richard – who hails from Saint Martins, New Brunswick – ever meet that other fabulous homosexual, the late NB premier Richard Hatfield?

"I met him in a pub in Fredericton after he retired," Richard says. "He went [there] the same night every week and hung out with the law students and cruised the boys… It was funny growing up with [Hatfield as premier] because his sexuality was an open secret. No one talked about it. But the man had a doll collection, for God’s sake!"

Did Hatfield ever cruise Vaughan?

"God no! I was not in his league!" Richard says. "He liked the preppy, clean-cut lads. I was fat and studious!"

Say what he will, RM Vaughan still cuts a dashing figure and – like Burton, Branson, Gere and Little Richard – Vaughan truly is a fabulous Dick.